FEATURE: UN envoy confident use of child soldiers can be eradicated

The Security Council process of naming and shaming groups that recruit and use child soldiers has been effective in combating the scourge, the United Nations envoy working on the issue says, adding that, like slavery, this horrible practice can be eradicated with concerted action.

“I have seen personally the effect of this process,” the Secretary-General’s Special Representative for Children and Armed Conflict, Radhika Coomaraswamy, said in an interview with the UN News Centre following a recent visit to South Sudan.

In 2001, the Council recommended that the then-Secretary-General, Kofi Annan, list parties recruiting and using children in armed conflict in his annual report to the 15-member body. Since then it has also asked for lists on other violations against children, such as sexual violence, attacks on schools or killing and maiming.

“I have met heads of State and non-State actors and announced to them they’re on this list, and it makes a big difference – there’s no doubt about it,” said Ms. Coomaraswamy, a lawyer by training, and a leading international human rights advocate. In her capacity as a Special Representative, she serves as a moral voice and independent advocate to build awareness and give prominence to the rights and protection of boys and girls affected by armed conflict.

“You can talk to people all you want but the fact that they’re on a Security Council list really is something they’d decide to do something about," she said. "And they do try… not all, there are some who don’t care about the Security Council, as we know… but many think they’re going to be the legitimate rulers of their country in the future, so it has its weight.” 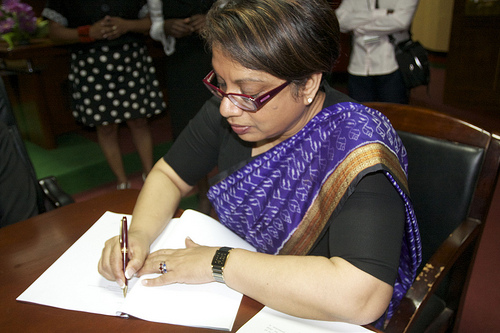 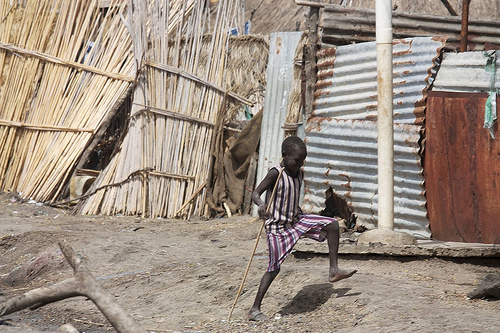 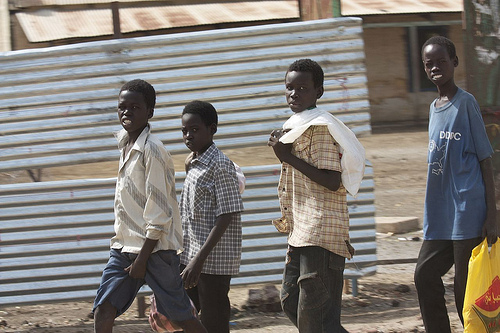 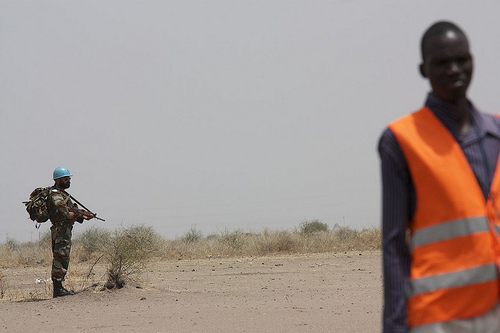 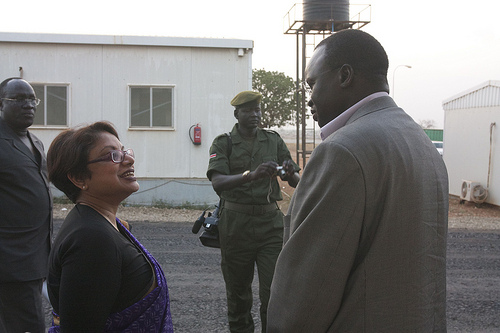 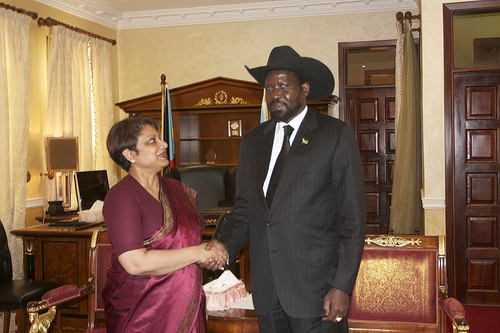 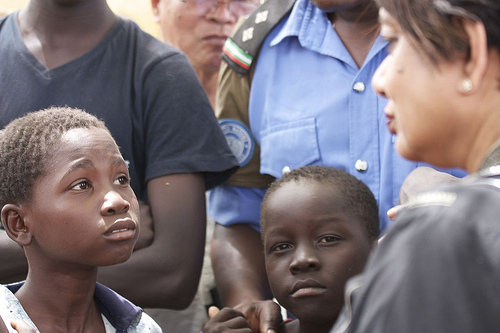 On a recent visit to South Sudan, SRSG Coomaraswamy and representatives of the UN Children’s Fund (UNICEF), the UN Mission in the Republic of South Sudan (UNMISS) and the South Sudan Ministry of Defense, signed an action plan for the release of children from the national army, the SPLA, and allied militias. UN Photo/T. La Rose

South Sudan’s recent signing of the action plan on children serving as soldiers applies not only to the SPLA, but also to all armed groups who have accepted a government amnesty. UN Photo/T. La Rose

The recently-signed action plan ensures that a transparent system is in place for disciplinary action against those in command who recruit children within the SPLA. It also improves communication among commanders to make sure that the practice of child recruitment is halted and responsibility for child protection is understood on all levels. UN Photo/T. La Rose

A UN peacekeeper on guard in Renk, in the state of Upper Nile, in South Sudan. “The children of South Sudan have witnessed so many horrors in this decades-old conflict and many have grown up in war. I urge the Government to implement the commitments made today and to make certain that, in this new country, future generations of children can spend their childhood with books and not in barracks,” SRSG Coomaraswamy said during her visit. UN Photo/T. La Rose

Since 2005, the SPLA has been listed on the Secretary-General’s list of parties to conflict who recruit and use children. Its signing of the action plan follows similar agreements in 2011 with the armed forces of Afghanistan, Chad and the Central African Republic. UN Photo/T. La Rose

In her meeting with President Salva Kiir, South Sudan’s leader reaffirmed to SRSG Coomaraswamy the commitment of the SPLA to release all children from their ranks. UN Photo/T. La Rose

Of her visit to South Sudan, SRSG Coomaraswamy said, "for this new nation to flourish, it is essential that education is made a priority, even with an austerity budget. It is only the presence of effective social programmes that will prevent children from being lured into armed militias." UN Photo/T. La Rose

The process has led to State and non-State actors agreeing to actions plans to release children in their ranks, as well as actually handing children over, Ms. Coomaraswamy said. A total of 17 action plans have been signed since the Special Representative took up her post in April 2006, and she hopes to have action plans in Myanmar and Somalia before she finishes her tenure in July.

“The Security Council process of listing, shaming and having targeted measures, possible targeted measures have, I think, put this issue front and centre. I think that, like slavery, in about 20 years we can eradicate it,” said the Special Representative.

The most recent action plan was signed by the Sudan People’s Liberation Army (SPLA) of South Sudan, where Ms. Coomaraswamy recently spent six days. In the plan, the SPLA – which had spent many years in armed conflict against the Sudanese Government before South Sudan’s independence – renewed its commitment to release all children within its ranks and to ensure that all militias being incorporated into the national army of the world’s newest nation are child-free.

Since 2006, the SPLA has been listed as party to conflict that recruits and uses children. Although this action plan is a renewal of commitments made in 2009, the SPLA, as a national army, signed for the first time last month at a ceremony in the capital, Juba.

“The children of South Sudan have witnessed so many horrors in this decades-old conflict and many have grown up in war,” Ms. Coomaraswamy had stated at the signing, urging the Government to implement its commitments to ensure that future generations of children can spend their childhood “with books and not in barracks.”

Since 2005, some 3,000 children in SPLA’s main training camps and in militia groups had been released. The UN estimates that about 2,000 children will be released as a result of the latest action plan.

The task of disarming, demobilizing and reintegrating the children will not be an easy one, Ms. Coomaraswamy noted. She stressed the need to work with the Government to develop health and educational facilities in a country where only four per cent of children go to secondary school and 92 per cent of women and girls are illiterate. The action plan signed by South Sudan follows similar agreements in 2011 with the Afghan National Security Forces and the Chadian National Army, among other actors.

The number of action plans signed reflects a “sea change” among State and non-State actors in terms of abandoning child recruitment, the Special Representative said. Since taking up the post, she has undertaken 25 country visits, with a central element of her advocacy strategy being to bring high-level visibility to the situation and rights of children affected by armed conflict.

The coming months will be focused on the finalization of the annual report of the Secretary-General to the Council on children and armed conflict, as well as pushing for the universal ratification of the Optional Protocol to the Convention on the Rights of the Child on the involvement of children in armed conflict. The protocol sets 18 as the minimum age for direct participation in hostilities, for recruitment into armed groups, and for compulsory recruitment by governments.

To date, 146 UN Member States have ratified the treaty while 47 are not party to it. Ms. Coomaraswamy is hopeful that progress can be achieved and that the efforts of her office can make a difference in the lives of children worldwide.

“Last year 11,000 children were released from armed groups,” she noted. “So, in a sense, I think we can make a difference, and that’s really what motivates me and my whole office.”

♦ Receive daily updates directly in your inbox - Subscribe here to a topic.
♦ Download the UN News app for your iOS or Android devices.
child|soldier