Ensuring universal access to water and using it wisely in agriculture is essential to end famine, drought and political instability, United Nations officials stressed today, adding that countries must strive to provide this vital source to all their citizens to achieve a sustainable future.

“Over the coming decades, feeding a growing global population and ensuring food and nutrition security for all will depend on increasing food production. This, in turn, means ensuring the sustainable use of our most critical finite source – water,” said Secretary-General Ban Ki-moon in his message marking World Water Day.

The theme of this year’s observance is water and food security. Currently, nearly one billion people suffer from hunger and some 800 million still lack a safe supply of freshwater.

In his message, Mr. Ban emphasized that guaranteeing food and water for all will require countries’ full engagement.

“It will require policies that promote water rights for all, stronger regulatory capacity and gender equality,” Mr. Ban said. “Investments in water infrastructure, rural development and water resource management will be essential.”

“For smallholder farmers in developing countries, water and land cannot be treated as separate issues. If we are to reduce poverty in rural areas, we must develop a holistic approach to focus on water in all of its contributions to development such as in areas of health and agriculture,” he said.

According to IFAD, approximately 70 per cent of the world’s water resources are used for agriculture and by 2025 two-thirds of the population could struggle to get access to this resource.

Meanwhile, a UN water and sanitation expert, Catarina de Albuquerque, urged countries to address the right to water during the UN Conference on Sustainable Development (Rio+20) taking place in Rio de Janeiro in June, in which world leaders as well as members from the private sector and civil society will come together to discuss ways to encourage green economies and eradicate poverty.

In particular, Ms. Albuquerque called for all countries to recognize the right to water and sanitation for all, stressing that countries cannot go back on their decision to support this right.

“Some States, including Canada and the United Kingdom, are apparently proposing the removal of an explicit reference to the right to water and sanitation for all from the first draft of the Rio+20 United Nations Conference on Sustainable Development outcome document,” Ms. Albuquerque warned. “We should be marking World Water Day with progress, not debating semantics and certainly not back-tracking on these issues.”

To mark the day, the UN Food and Agriculture Organization (FAO) is hosting a series of events at its headquarters in Rome, Italy, which include discussions on improving water management, reducing food and water waste, and building up communities’ resilience to climate change. 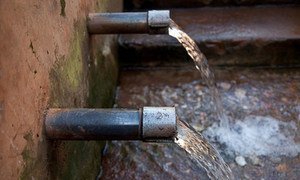