Ban underlines rights of persons with Down syndrome

Secretary-General Ban Ki-moon today urged the world to reaffirm that persons with Down Syndrome are entitled to the full enjoyment of all human rights and fundamental freedoms, deploring the stigma and discrimination they continue to face.

“For too long, persons with Down Syndrome, including children, have been left on the margins of society,” said the Secretary-General, in a message delivered on his behalf by Deputy Secretary-General Asha-Rose Migiro at an event at UN Headquarters to mark World Down Syndrome Day – the first time it is being observed by the United Nations. “In many countries, they continue to face stigma and discrimination as well as legal, attitudinal and environmental barriers that hinder their participation in their communities.”

Down Syndrome is caused by extra genetic material in chromosome 21. It affects mental and physical development and can also lead to conditions including heart disease, Alzheimer’s disease and leukaemia.

Its patients can also be afflicted with other conditions, including heart disease, Alzheimer’s disease and leukaemia.

In the remarks, Mr. Ban noted that discrimination can be as invidious as forced sterilization, and as subtle as segregation and isolation through both physical and social barriers; and, that persons with Down Syndrome are often denied the right to equal recognition before the law, as well as the right to vote or be elected.

“Intellectual impairments have also been seen as legitimate grounds for depriving persons with Down Syndrome of their liberty, and for holding them in specialized institutions, sometimes for their entire lives,” Mr. Ban said.

According to the World Health Organization (WHO), the estimated incidence of Down Syndrome is between 1 in 1,000 to 1 in 1,100 live births worldwide; and, each year approximately 3,000 to 5,000 children are born with this chromosome disorder.

The Secretary-General said that the prejudice that children with Down Syndrome obstruct the education of others has led some parents of children with intellectual disabilities to put their children in special schools or keep them at home.

“Yet research shows – and more people are coming to understand – that diversity in the classroom leads to learning and understanding that benefit all children,” Mr. Ban said.

He pointed out that the United Nations has for decades worked to ensure the well-being and human rights of all people, and that those efforts have been strengthened by the adoption of the Convention on the Rights of Persons with Disabilities in 2006.

That Convention “embodies a paradigm shift in which persons with disabilities are no longer regarded as objects of charity and welfare, but as persons with equal rights and dignity who can make an enormous contribution to society in their own right.”

“Let us each do our part to enable children and persons with Down Syndrome to participate fully in the development and life of their societies on an equal basis with others. Let us build an inclusive society for all,” said Mr. Ban in the remarks.

He also praised the global partnership of governments, activists, families, professionals and others who worked to bring the Day into existence.

Speaking on her own behalf at the event at UN Headquarters, Deputy Secretary-General Asha-Rose Migiro called for concerted action to ensure that children and adults with Down Syndrome participate fully in the development of their societies on equal terms with other people. 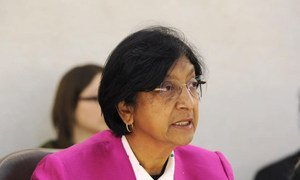 The United Nations human rights chief today called for the removal of barriers that prevent the participation of persons with disabilities in political life and public affairs.