International aid donors must do more to ensure that their spending on disaster risk reduction is in line with the needs of affected communities, a new United Nations-backed report launched today reveals.

“This report is a very timely examination of funding for disaster risk reduction when it is now clear that we have broken through the trillion dollar ceiling for economic losses so far this century,” said the Special Representative of the Secretary-General for Disaster Risk Reduction, Margareta Wahlström, who noted that as of 2011, a conservative estimate put costs from disasters at over $1,380 billion.

The study spotlights the fact that, between 2000 and 2009, only $3.7 billion went to 40 of the world’s poorest countries for disaster risk reduction, representing a mere 1 per cent of their overall development aid allocation of $363 billion.

“Clearly there is something not right here. After all, these countries account for over half the people affected by disasters and almost 80 per cent of deaths,” continued Ms. Wahlström.

“I would urge donors to re-examine their priorities to ensure that spending on disaster risk reduction and climate change adaptation is more in line with the needs,” she added, noting that the impact of the economic losses was much higher in least developed countries than in high-income nations. 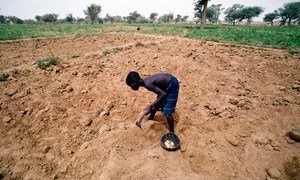 Climate change is already having an impact in the livelihoods of millions of people in the Sahel and West Africa, according to a new United Nations study released today, which calls for governments to implement policies that will prevent competition for resources, conflict and forced migration in the region.