A United Nations panel today agreed on a set of measures to prevent the use of illicit drugs and strengthen national and regional responses, including using treatment instead of incarceration to stem a worrying global trend in the abuse of narcotics.

Wrapping up its week-long 55th session in Vienna, the Commission on Narcotic Drugs (CND), adopted 12 resolutions, including on the treatment, rehabilitation and social reintegration of drug-dependent prisoners; treatment as an alternative to incarceration; and preventing death from overdose.

The commission, which is made up of 53 member States, underlined the need for gender-specific interventions and called for the promotion of drug prevention, treatment and care for female drug addicts. It also called for more evidence-based strategies to prevent the use of illicit drugs, especially among young people.

“It is only by acknowledging the drug conventions as the foundation for our shared responsibility that we can make successive generations safe from illicit drugs,” he said.

The commission acknowledged the role played by developing countries in sharing best practices, including through continental and inter-regional cooperation to promote alternative development programmes in poor rural communities dependent on the cultivation of illicit drug crops.

One of the new issues that emerged during the current session is the increasing diversion of chemicals to manufacture illicit amphetamine-type stimulants, a group of synthetic drugs that includes ecstasy and methamphetamine.

The commission called for international cooperation to curb the manufacture of new psychoactive substances. It also recommended the development of an international electronic authorization system for the trade in controlled substances. 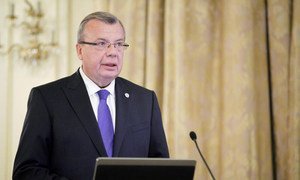 The head of the United Nations Office on Drugs and Crime (UNODC) today urged States to intensify prevention strategies as part of a comprehensive response to drug demand, supply and trafficking.