15 March 2012
The Prosecutor of the International Criminal Court (ICC) today described the conviction of Congolese warlord Thomas Lubanga Dyilo on charges of recruiting child soldiers as “a victory for humanity,” adding that he will ask for a prison term that is close to the maximum 30 years.

In a landmark ruling yesterday that was hailed by United Nations officials as an important step in the fight against impunity, the ICC found Mr. Lubanga Dyilo guilty of recruiting children to fight in his militia in the Democratic Republic of the Congo (DRC) in 2002 and 2003.

“The judges have decided that on 18 April the parties have to present their general views on reparation,” Luis Moreno-Ocampo, the ICC Prosecutor, told a news conference in The Hague, where the court is based. “On the same day, the prosecution will also present its request for punishment. The question here is: what is the proper retribution for someone who has forever affected the lives of so many children.”

“If we are going to ask for one year per child, we would go far beyond the maximum of 30 years established by the statute. As we indicated in our opening statement, we will seek a sentence close to the maximum,” said Mr. Moreno-Ocampo.

He paid tribute to the witnesses in the trial who he said had the courage to transform their painful experiences during the conflict in DRC’s Ituri region into evidence. “We know how they struggled each night to overcome their past, to move on from horrors they suffered,” he said.

Mr. Moreno-Ocampo said his office is planning a visit to DRC to thank President Joseph Kabila for his commitment and support for the ICC process during Mr. Lubanga Dyilo’s trial, but also to ask for the immediate arrest of another indicted Congolese figure, Bosco Ntaganda.

Mr. Ntaganda was third in seniority in Mr. Lubanga Dyilo’s militia in Ituri, according to Mr. Moreno-Ocampo, who said that his office will add the counts of rape and murder to his indictment.

“After reviewing the evidence, we found that evidence is enough to present charges for murder and rapes against Bosco Ntaganda. We will do that.” Mr. Ntaganda is currently a general in the DRC’s national army.

“The Bosco Ntaganda case is showing the cost of impunity. After six years, he is still at large. In the meanwhile, he became the leader of one of the more dangerous militias in the Kivu [provinces], allegedly committing mass rapes,” said Mr. Moreno-Ocampo. “He cannot be a general in the DRC army. It is time to arrest him.” 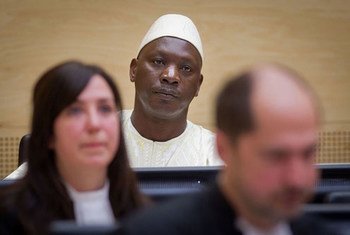