The report, which was produced by the UN Economic Commission for Europe (UNECE), provides guidance on how to address water access disparities, and showcases successful policies that have been implemented by governments, water operators and civil society.

“No one left behind: Good practices to ensure equitable access to water and sanitation” notes that access to improved water and sanitation solutions in rural areas in the pan-European region is 10 per cent lower than for urban areas, and suggests putting investment programmes in place to help reduce this gap.

In addition, the report underscores that social inclusion policies are needed to be able to provide water access to marginalized and vulnerable groups such as the homeless, disabled, sick, or those living in unsanitary housing, who are often unable to get access to safe drinking water.

Increasing water prices are also singled out as a key factor for unequal water access in European Union countries, with the report highlighting how tariffs and social protection measures can help consumers cover the costs.

UNECE Deputy Executive Secretary Andrey Vasilyev, who presented the report at the World Water Forum in Marseille, underlined that “political will and strong water governance” are needed to tackle these disparities.

Last week, the UN announced that the goal of reducing by half the number of people without access to safe drinking water was achieved, ahead of the 2015 deadline for reaching the Millennium Development Goals (MDGs), the globally agreed development targets aimed at ridding the world of extreme poverty, hunger and preventable diseases.

However, the target for sanitation has not been met, and nearly one billion people still lack access to safe drinking water.

Annan creates new Advisory Board on Water and Sanitation 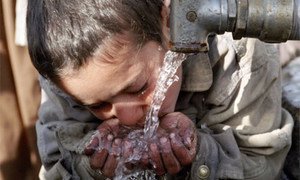 An unprecedented rise in the demand for food, rapid urbanization and climate change are significantly threatening global water supplies, according to a United Nations report released today, which stresses that a radical new approach to managing this essential resource is needed to be able to sustain future consumption levels.