5 March 2012
Somalia currently has the best opportunity to end its two decades-long conflict and bring lasting peace and stability to the country, but doing so will require a greater efforts by all parties and sustained support from international partners, the Security Council heard today.

The country’s Transitional Federal Institutions (TFIs) are in the process of implementing a roadmap devised in September last year that spells out priority measures to be carried out before the current transitional governing arrangements end on 20 August.

Before then, the Horn of Africa nation needs a new constitution, a smaller and more representative Parliament and elections for the positions of President, Speaker and Deputies.

“Ending the transition on time will require more efforts and support from all international actors in the coming months,” Augustine P. Mahiga, the Secretary-General’s Special Representative for Somalia, told the Council via video-link from the country. “We must ensure that all of us are pulling together in this regard.”

“We do not have the luxury of time,” said Mr. Mahiga, who heads the UN Political Office for Somalia (UNPOS). “We are faced with a situation that demands urgent action. The TFG remains the international community’s main Somali interlocutor. Building their capacity would be critical to transforming the country into a functioning State.”

Today’s meeting, chaired by Parliamentary Under Secretary of State Henry Bellingham of the United Kingdom, which holds this month’s rotating presidency of the Council, follows the 23 February London Conference on Somalia.

It also follows the extension by the Council of the mandate of the African Union peacekeeping force in Somalia (AMISOM) through 31 October and its call for an almost 50 per cent increase in the 12,000-strong force to deal with continued insecurity in the impoverished country.

AMISOM receives support from the UN Department of Field Support via its Support Office known as UNSOA, which provides logistical support to the force, facilitates the provision of humanitarian assistance, and creates conditions conducive to long-term stabilization, reconstruction and development.

“This is a critical moment for Somalia,” Secretary-General Ban Ki-moon said in his remarks to the Council.

“A new window of opportunity for peace and stability has opened,” stated the Secretary-General, reiterating his message to the London conference. “But it is a narrow window. All stake-holders must act with urgency and unity of purpose. We cannot afford to miss this opportunity.”

In a presidential statement read out at today’s meeting, the Council emphasized the need to build on agreement in London and “continue to pursue a comprehensive strategy for the establishment of peace and stability in Somalia through the collaborative effort of all stakeholders.”

It also voiced its grave concern about the threat posed to Somalia and the international community by terrorist attacks by Somali armed opposition groups, in particular Al-Shabaab, and welcomes the commitment made at the London conference for renewed international action to address this threat. 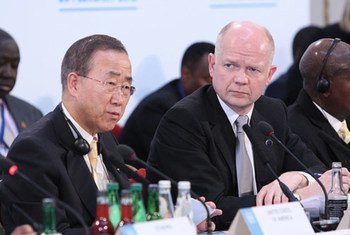 23 February 2012
Secretary-General Ban Ki-moon today urged the international community to heed the “cries for peace” of the Somali people and help them overcome decades of instability and build a more stable and prosperous future.