5 March 2012
The head of the United Nations atomic watchdog today highlighted ongoing serious concerns about a possible military dimension to Iran’s nuclear programme, adding that the country has tripled its monthly production of enriched uranium.

“Iran is not providing the necessary cooperation… the Agency is unable to provide credible assurance about the absence of undeclared nuclear material and activities in Iran, and therefore to conclude that all nuclear material… is in peaceful activities,” Yukiya Amano, the Director General of the UN International Atomic Energy Agency (IAEA), told the meeting of the Agency’s Board of Governors in Vienna.

“Developments since my last report include – the tripling of monthly production of 20 per cent enriched UF6 in Iran,” said Mr. Amano.

The IAEA will continue to address the Iran nuclear issue through dialogue and in a constructive spirit, aiming to resolve all outstanding issues, particularly those related to possible military dimensions of the country’s nuclear programme, he added.

“I urge Iran, as required in the binding resolutions of the Board of Governors and the Security Council, to take steps towards the full implementation of its Safeguards Agreement and its other obligations,” he added.

Concerning the Democratic People’s Republic of Korea (DPRK), Mr. Amano said the Agency has not been able to implement any safeguards measures in that country for nearly three years and its knowledge of the current status of the country’s nuclear programme is therefore limited.

“I again call upon the DPRK to fully comply with its obligations under relevant Security Council resolutions, to come into full compliance with the NPT [Nuclear Non-Proliferation Treaty] and to cooperate promptly and fully with the Agency.”

Mr. Amano told the Board that the IAEA’s nuclear technology review this year contains data on the initial impact of the earthquake and tsunami-related disaster at Japan’s Fukushima Daiichi nuclear power plant last year.

According to the review, 13 reactors across the world were permanently retired in 2011, 12 of them as a direct result of the Fukushima disaster. There were seven new grid connections – the third straight year of increases – but construction started of only four new nuclear reactors.

He said that the Agency’s updated projections suggest that the drop in new construction starts will be temporary. There were 65 reactors under construction at the end of 2011, 44 of them in Asia, which remains the centre of growth, he added.

On nuclear applications, Mr. Amano said the IAEA focused on cancer control in 2010 and will focus on water in 2011.

“I plan to pay special attention this year to nuclear applications related to food. I will highlight the Agency’s contribution in food production, food protection and food safety,” he said.

In food protection, the Mediterranean fruit fly has officially been declared eradicated from north-western Guatemala, thanks to IAEA’s sterile insect technique.

On food production, he cited Uruguay, where IAEA support to the national veterinary laboratory has made it possible for food producers to provide proof that their products do not contain harmful contaminants. 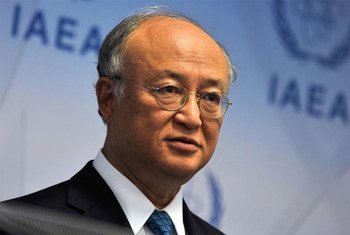 22 February 2012
The United Nations atomic energy watchdog has voiced disappointment at the lack of progress made during a two-day visit to Iran aimed at clarifying possible military dimensions to the country’s nuclear programme.