1 March 2012
The top United Nations human rights body today deplored the “brutal” actions of the Syrian authorities in response to the popular uprising that began nearly a year ago and called for an immediate end to attacks against civilians and other abuses.

In a resolution adopted by a vote of 37 in favour to 3 against, with 3 abstentions, the 47-member Human Rights Council strongly condemned the continued “widespread and systematic” violations of human rights and fundamental freedoms by the Syrian authorities.

These include the use of force against civilians, arbitrary executions, the killing and persecution of protestors, enforced disappearances, torture and sexual violence, including of children.

China, Cuba and Russia voted against the text, while Ecuador, India and the Philippines abstained during the vote, which came at the end of an urgent debate held by the Council on the situation in Syria.

In the resolution, the Council deplored the “brutal actions of the Syrian regime over the past 11 months,” and reiterated the need to urgently address humanitarian needs, to facilitate the effective delivery of assistance and to ensure safe access to medical treatment.

It called on the Syrian Government to immediately put an end to all human rights violations and attacks against civilians, to cease all violence, to allow free and unimpeded access by the UN and humanitarian agencies to carry out a full assessment of needs in the city of Homs, which has been under severe attack for over a month, and other areas, and to permit humanitarian agencies to deliver vital relief goods and services to all civilians affected by the violence.

Last night Secretary-General Ban Ki-moon warned that the situation in Syria – where thousands of civilians have died over the past year as a result of a Government crackdown against a pro-democracy uprising – “has grown increasingly desperate.”

Speaking after his meeting with former Secretary-General Kofi Annan, the newly-appointed Joint Special Envoy of the UN and the Arab League for Syria, Mr. Ban stressed that there is no more urgent task before the international community than to immediately end the killing.

“We seek a cessation of violence that sets the stage for a peaceful solution – a solution that offers all the Syrian people, regardless of religion or ethnicity or political affiliation, a future of security, dignity and freedom,” he stated.

Mr. Annan is slated to hold further discussions this week with UN officials in New York, following which he will travel to Cairo, Egypt, to meet with Arab League Secretary-General Nabil El-Araby.

Meanwhile, UN Emergency Relief Coordinator Valerie Amos is still awaiting permission from the Syrian authorities to visit the country to assess the humanitarian situation and renew the call for urgent humanitarian access.

In a statement to the press, members of Security Council today voiced their deep disappointment that Ms. Amos, who is also Under-Secretary-General for Humanitarian Affairs, was not granted authorization to visit Syria by the Government in a timely manner, “despite repeated requests and intense diplomatic contacts aimed at securing Syrian approval.”

Council members deplored the rapidly deteriorating humanitarian situation and called on the authorities to grant Ms. Amos immediate and unhindered access to the country.

Côte d’Ivoire: UN to assess situation in areas where poll results are on hold 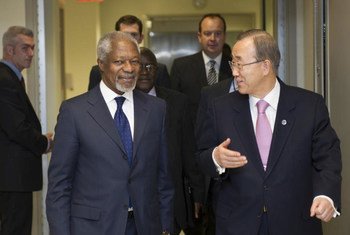 29 February 2012
Secretary-General Ban Ki-moon and Kofi Annan have held talks today to discuss how the newly appointed Joint Special Envoy of the United Nations and the Arab League for Syria can help to end the deadly violence gripping the country and find a peaceful political solution.