The Security Council today extended until the end of 2012 the mandate of the United Nations peacekeeping mission in Timor-Leste so that it can continue to help promote peace, stability and development in what is expected to be a very eventful year for the country.

Until its expected departure on 31 December, the UN Integrated Mission in Timor-Leste (UNMIT) will assist with key tasks such as institutional development and capacity-building of the national police, known as the PNTL, as well as provide electoral assistance.

This year Timor-Leste will celebrate the 10th anniversary of its independence and hold presidential elections on 17 March, followed by a legislative poll at the end of June.

In a unanimously adopted resolution, the Council endorsed the plan of UNMIT’s phased drawdown, “in accordance with the wishes of the Government of Timor-Leste, conditions on the ground and following the successful completion of the 2012 electoral process.”

It also urged all parties in the country, particularly political leaders, to continue to work together and engage in political dialogue and to consolidate peace, democracy, rule of law, and sustainable social and economic development; promote human rights; and advance national reconciliation.

Ameerah Haq, the Special Representative of the Secretary-General and head of UNMIT, told the Council yesterday that Timor-Leste has made significant progress in strengthening national peace and stability and that preparations for the upcoming elections are going smoothly.

Secretary-General Ban Ki-moon will, after consulting with the Government formed after the elections, submit a report to the Council on his suggestions on UNMIT’s anticipated withdrawal and the scope of the UN’s future presence in Timor-Leste. 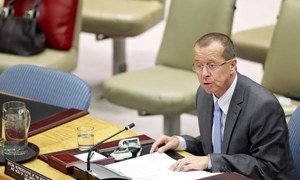 The top United Nations envoy in Iraq has strongly condemned the terrorist attack that occurred on Saturday on pilgrims in the southern city of Basra, resulting in a large number of deaths and injuries.