The United Nations atomic energy watchdog has voiced disappointment at the lack of progress made during a two-day visit to Iran aimed at clarifying possible military dimensions to the country’s nuclear programme.

An expert team from the International Atomic Energy Agency (IAEA) held talks with Iranian officials on 20 and 21 February, following previous discussions at the end of last month.

“We engaged in a constructive spirit, but no agreement was reached,” IAEA Director General Yukiya Amano stated in a news release.

The agency had requested access to the military site at Parchin during both the first and second round of discussions. However, Iran did not grant permission for this visit to take place.

“It is disappointing that Iran did not accept our request to visit Parchin during the first or second meetings,” said Mr. Amano.

In addition, “intensive” efforts were made to reach agreement on a document facilitating the clarification of unresolved issues in connection with Iran’s nuclear programme, particularly those relating to possible military dimensions.

“Unfortunately, agreement was not reached on this document,” stated the agency.

This week’s visit was aimed at resolving all outstanding issues regarding Iran’s nuclear programme, which Tehran says is for the peaceful purpose of providing energy, but some countries contend is for the purpose of developing nuclear weapons.

♦ Receive daily updates directly in your inbox - Subscribe here to a topic.
♦ Download the UN News app for your iOS or Android devices.
iran|nuclear 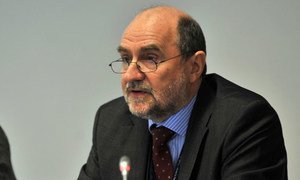 UN experts in Iran to discuss concerns of nuclear programme

A five-member group of experts from the United Nations atomic energy watchdog is today continuing its visit to Iran, where the members are holding talks with officials about international concerns over the country’s nuclear programme.