21 February 2012
The head of the United Nations peacekeeping operations today underlined the challenging diversity of work undertaken by the department’s various field missions, stressing that peacekeepers are a valuable tool in global efforts to respond to threats to international peace and to prevent the recurrence of conflicts.

“While some of our missions are charged with a traditional role, such as monitoring a ceasefire, we also have multi-dimensional integrated missions whose mandates have evolved over the past two decades to include – implementation of peace accords; protection of civilians, facilitation of humanitarian assistance; support to electoral processes; and strengthening national capacities in the areas of rule of law and security,” said Hervé Ladsous, Under-Secretary-General for Peacekeeping Operations.

He told the General Assembly’s Special Committee on Peacekeeping Operations that the global membership of the UN provided peacekeeping with a universal legitimacy and a global reach, adding that it remains a highly-cost effective policy tool for the international community, relative to the costs of conflict.

Mr. Ladsous pointed out that the total expenditure on peacekeeping from 1948 to 2010 is estimated at $69 billion. In comparison, some estimates indicate that the defence expenditure for 2010 of the 15 highest-spending countries amounted to about $1.6 trillion.

However, the Under-Secretary-General stressed that he remains mindful of the difficult financial situation confronting many UN Member States and assured them that the Department of Peacekeeping Operations (DPKO) is committed to ensuring the optimum use of resources.

“For this reason, the consolidated peacekeeping budget submissions for the 2012-2013 financial period proposes a 7.8 per cent reduction, amounting to $600 million lower than the current financial period,” he said.

Mr. Ladsous stressed the need for global partnership, which he said, sustains UN peacekeeping. “Unified political support of the Member States has always been and remains a critical factor in the success of UN peacekeeping,” he said.

To address some of the challenges facing peacekeeping missions, such as the shortages of the military helicopters that are crucial for the fulfilment of the civilian protection mandate, Mr. Ladsous said DPKO is exploring the use of modern technology to fill some of the gaps.

“We are currently conducting a feasibility study for the use of simple unmanned aerial vehicles in UNMISS, with the consent of the host authorities, for area surveillance and reconnaissance.

“The use of such drones during the recent crisis in Jonglei [South Sudan] in order to map the movements of armed militias would have enhanced the capability of the Government of South Sudan and of UNMISS [UN Mission in South Sudan] to protect civilians by preventing violence and displacements,” he added.

Susana Malcorra, Under-Secretary-General for Field Support, told the Committee that her office is dedicated to sustained efforts to “deliver proactive, effective and responsive support to all field operations.”

“At the same time, we maintain our focus on the long-term strategic goal of moving toward a global enterprise that delivers high-quality, integrated and cost-effective mission support without compromising the missions’ ability to deliver on their mandates,” she said. 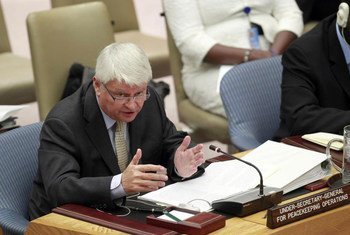 24 October 2011
The head of the United Nations peacekeeping department today stressed the need for flexible, agile and responsive mechanisms in support of changing situations, saying that the increasingly complex peacekeeping mandates have to be matched with specialized skills and well-trained personnel.