An independent United Nations human rights expert today renewed his call on Israel to release a Palestinian prisoner who has been on a hunger strike for over two months to protest his detention and whose health is reported to be deteriorating.

Khader Adnan has been refusing food since 18 December to protest his “humiliating” detention and treatment by Israeli security forces and his objection to Israel’s use of detention without charge, according to a news release issued by the UN human rights office in Geneva (OHCHR).

“I am informed that Mr. Adnan’s health has already suffered irreparable damage, he is in jeopardy of dying at any moment,” said Richard Falk, the Special Rapporteur on the situation of human rights in the Palestinian territories, after wrapping up a 10-day fact-finding mission to the region.

“I reiterate my call on the Government of Israel to uphold Mr. Adnan’s rights, taking full account of the extreme urgency of the situation,” he added.

The expert also stressed that “allegations of torture and other mistreatment should be promptly, independently and impartially investigated.”

Torture and cruel and degrading treatment “is not only a grave violation of human rights and a war crime; it may also be subject to international criminal accountability, including through universal jurisdiction,” said Mr. Falk, who added that Mr. Adnan’s case is emblematic of the Israeli practice of detaining Palestinians without charges.

“The Government of Israel calls this ‘administrative detention,’ but it is more honestly termed detention without charges, or arbitrary detention,” he said.

During his recent visit to the region, Secretary-General Ban Ki-moon discussed the situation of Palestinian prisoners in Israeli custody when he met with the Palestinian Minister of Prisoners’ Affairs.

According to information received by Mr. Falk, Israel currently has some 300 Palestinians detained without charges, and an estimated 4,400 Palestinian detainees in its prisons.

Several experts on prison conditions that Mr. Falk consulted with raised concerns regarding physical, verbal and psychological abuse; lack of access to proper medical treatment; medical neglect; widespread use of solitary confinement for extended periods; overcrowding and decrepit cells; and the lack of family visits.

“It is dismaying to note that these concerns have been raised for many years without producing reforms or well evidenced responses to the charges,” the expert stressed.

“I will continue to investigate and report on the situation of Palestinian prisoners. And I would add that the violation of the rights of thousands of prisoners, Palestinian or otherwise, should be given the utmost priority by the international community.”

During his visit, which included Egypt and Jordan, Mr. Falk was unable to travel to the Gaza Strip or to Israel. He was also unable to hear from Palestinian refugees elsewhere than Jordan, due to the prevailing situation in Syria and unwillingness of the Government of Lebanon to receive his mission.

Mr. Falk, who reports to the Geneva-based UN Human Rights Council in an independent and unpaid capacity, will submit his full report on his mission to the region in June. 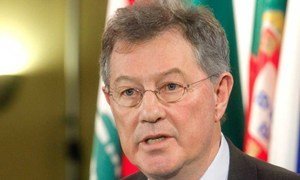 The United Nations Special Coordinator for the Middle East Peace Process today called on Israel to do everything in its power to preserve the health of a Palestinian detainee who is on a hunger strike and to resolve the case.