UN Photo/Devra Berkowitz
Digital boards inside the General Assembly display the votes cast by Member States on a draft resolution on Syria.
21 February 2012

A group of independent United Nations experts today condemned the arrest of at least 16 people in Syria, including prominent human rights figures, and called for the release of all those arbitrarily detained amid the ongoing Government crackdown on that began nearly a year ago.

In a news release issued in Geneva, the experts, who all report to the UN Human Rights Council, stated that it appears the arrests and detention are directly linked to the activities of the Syrian Centre for Media and Freedom of Expression in the defence of human rights. They also voiced their concern that the individuals may be subjected to torture and ill treatment.

“The Syrian authorities should end all acts of harassment against human rights defenders and release all those arbitrarily arrested and detained,” said the UN Special Rapporteurs on human rights defenders, Margaret Sekaggya; freedom of expression, Frank La Rue; torture, Juan Méndez; and the Chair-Rapporteur of the Working Group on Arbitrary Detention, El Hadji Malick Sow.

Last Thursday – the same day that the General Assembly adopted a resolution condemning the violent Government crackdown in Syria – security forces raided the offices of the Centre, a prominent human rights organization, according to the news release.

Everyone there, including its director, Mazen Darwich, blogger Razan Ghazawi, and at least 14 other people, were reportedly arrested, blindfolded and taken to Al Jawiya in Mezza airport.

“The arrest of these persons, including prominent human rights defenders, is emblematic of an alarming and recurrent pattern of arbitrary detention in Syria since March 2011. Detention without legal basis should never be used as a method of repression,” said Mr. Sow.

Ms. Sekaggya underscored that States must ensure that no harm comes either physically or mentally to human rights defenders. “The current situation in Syria does not provide a pretext for Governments to harass and arbitrarily detain human rights defenders,” she said. “On the contrary, they play a crucial role in the protection of human rights in high-risk situations. The Government should work with them, not against them.”

More than 5,400 people are believed to have been killed since the uprising in Syria – part of the broader Arab Spring movement across North Africa and the Middle East – began in March last year, and senior UN officials have repeatedly urged the Government to stop the violence and hold dialogue with opposition groups.

In addition, tens of thousands, including children, have been arrested, with more than 18,000 reportedly still arbitrarily held in detention. Thousands more are reported missing amid the crisis, which has sent 25,000 people to neighbouring and other countries to seek refuge and displaced more than 70,000 within the country. 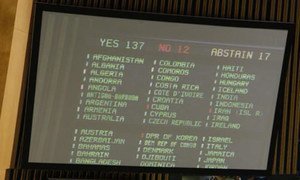 The General Assembly today strongly condemned the continued “widespread and systematic” human rights violations by the Syrian authorities and demanded that the Government immediately cease all violence and protect its people.