Countries in the Asia-Pacific region have made big gains against poverty and advancing towards other development goals, but need to redouble efforts if they are to meet globally agreed targets to reduce hunger and child and maternal mortality, the United Nations reported today.

The region has already reached the Millennium Development Goal (MDG) of halving the incidence of poverty, reducing the proportion of people living on less than $1.25 per day from 50 to 22 per cent between 1990 and 2009, according to the latest UN regional assessment.

The region has also achieved some other MDG indicators ahead of the 2015 deadline, states the report, published by the UN Economic and Social Commission for Asia and the Pacific (ESCAP), the Asian Development Bank (ADB) and the UN Development Programme (UNDP).

These include promoting gender equality in education, reducing HIV prevalence, stopping the spread of tuberculosis, increasing forest cover, reducing consumption of ozone-depleting substances and halving the proportion of people without access to safe drinking water.

At the same time, the report states that while strong economic dynamism has driven regional success in reducing poverty, many countries continue to lose “shocking” numbers of children before their fifth birthday and thousands of mothers die unnecessarily while giving birth. More than three million children below the age of five died in 2010 alone.

At the present rate of progress, the region as a whole is unlikely to meet MDGs related to eradicating hunger, reducing child mortality and improving maternal health, among others, the report warns.

“We are in a race against time, with just three years left to achieve the MDGs. The good news though is that our analysis shows many of these goals can still be reached with a redoubling of effort in the time remaining until 2015,” said ESCAP Executive Secretary Noeleen Heyzer via video message at the report launch.

The report reveals striking disparities between and within sub-regions, countries and even social groups in their progress towards MDGs. While South Asia as a whole is on track for just nine MDG indicators, Sri Lanka is on track for 15 indicators and outperforms the sub-region.

The report notes that many countries can speed up progress with just a little effort. Fourteen off-track Asia-Pacific countries need to accelerate progress by less than two percentage points annually to reach the target of halving the proportion of underweight children by 2015.

The report outlines an eight-point agenda to fast-track progress towards the health MDGs that includes establishing an equitable, accessible, responsive and integrated primary health-care system as well as ensuring preventive and curative mother and child health services.

“It is clear that achieving health outcomes requires interventions in health, but more importantly outside the health sector to include water, nutrition, education and gender empowerment,” stated Ajay Chhibber, UNDP Associate Administrator and Director for Asia and the Pacific.

♦ Receive daily updates directly in your inbox - Subscribe here to a topic.
♦ Download the UN News app for your iOS or Android devices.
Asia|Pacific

Asia-Pacific’s resilience against financial turmoil being ground down – UN 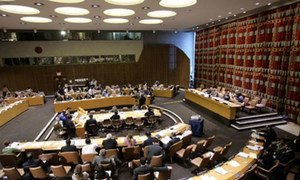 Asia-Pacific countries need to boost their cooperation with each other if the region is to achieve the series of social and economic targets known as the Millennium Development Goals (MDGs) by their 2015 deadline, a United Nations meeting heard today.