“Honduras faces serious challenges in combating violence and insecurity,” said UN Special Rapporteur Margaret Sekaggya yesterday at the end of her eight-day mission in the country, where she was monitoring and reporting on the human rights situation.

“The pervasive impunity and absence of effective investigations of human rights violations undermine the administration of justice and damage the public’s trust in authorities.”

Ms. Sekaggya said that during her visit, which finished yesterday, she observed that certain groups are more at risk than others, with journalists, lawyers, prosecutors and staff of the National Human Rights Commission being among those at higher risk. Defenders working to defend the rights of women, children, the lesbian, gay, bisexual and transgender (LGBT) community, indigenous and Afro-Honduran communities as well as those working on environmental and land rights issues were also targeted, she said.

The lack protection for these groups increases their vulnerability, Ms. Sekaggya stressed, and contributes to the cycle of impunity affecting the population’s confidence in the rule of law. “I was repeatedly informed by human rights defenders that due to their fear of the police, they abstain from seeking protection as they consider that contact with the police exposes them to increased security risks,” she said.

Ms. Sekaggya called for the urgent establishment of an adequately resourced protection programme and the development of a transparent inter-institutional framework as a measure to overcome the distrust of authorities among human rights defenders.

“The Government should establish a clear State policy which recognises the indispensible work of human rights defenders and ensure their protection,” Ms. Sekaggya said. She welcomed President Porfirio Lobo Sosa’s public commitment to implement her recommendations and noted that “the President should promote and lead dialogue between authorities and civil society in order to create a favourable environment for human rights defenders.”

During her mission to Honduras, Ms. Sekaggya visited Tegucigalpa, the capital, and the cities of San Pedro Sula and La Ceiba, where she met with Mr. Lobo Sosa and Government officials, as well as with representatives of civil society.

Ms. Sekaggya, who serves in an independent and unpaid capacity, will present her final recommendations from her visit in her report to the UN Human Rights Council next year. 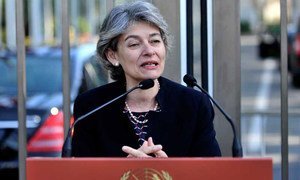 The head of the United Nations agency tasked with defending press freedom today voiced outrage at the murder of a radio journalist in Honduras, where at least 17 reporters have been slain since the start of last year.