15 February 2012
Delegates at a meeting convened by the United Nations to draw up strategies to respond the humanitarian crisis in West Africa’s drought-prone Sahel region today called for comprehensive and rapid assistance to the millions of people affected, especially children and women.

Leaders of UN agencies, representatives from governments in the affected countries and major donors, meeting at the headquarters of the UN World Food Programme (WFP) in Rome, stressed the need for a combination of relief, early recovery and longer-term development programmes.

They resolved to work together to meet immediate food security and nutritional needs of affected people, while supporting programmes that address the root causes of problems and to strengthen the resilience of communities living in areas affected by chronic drought.

Actions will include support for short-term food security and nutrition response plans developed by national governments and regional organizations to increase access to food and scale up existing safety net programmes.

Targeted emergency food assistance, including cash-for-work programmes, cash transfers and food vouchers, will be undertaken while strengthening local markets and linking local production to consumption. Nutritionally-enhanced products for children and nursing or pregnant mothers will be delivered, as will therapeutic foods for those suffering from severe acute malnutrition.

There will also be deployment of early warning information management systems that support the repositioning and consolidation of needs assessments to provide regular, timely, and accurate updates on the humanitarian situation.

Participants at the Rome meeting noted that internal and external displacement of people in Mali as a result of fighting between the insurgents and government forces will exacerbate an already severe situation in Mauritania, Niger and Burkina Faso.

They called for the development and implementation of plans that simultaneously provide for immediate assistance to avert a more severe humanitarian crisis during the coming lean season, while addressing the underlying causes of the problem.

Delegates stressed the need for continued support to governments of countries in the Sahel, as well as regional organizations to strengthen their capacity to address the structural causes of the recurring food crises in the region, including through targeted approaches to overcome obstacles in meeting the Millennium Development Goals (MDGs), particularly the aim to reduce by half the proportion of populations affected by hunger and poverty by 2015.

They said approaches that take into account the prevailing insecurity and recognise the need to incorporate disaster risk reduction, community security and conflict prevention interventions are also an integral to the response plan.

They underlined that enhanced coordination among UN agencies, governments, regional institutions, non-governmental organizations (NGOs), civil society groups, donors and other development partners will be crucial to support an integrated and efficient response to the immediate humanitarian needs and longer-term development of affected populations.

Those attending the meeting also called for immediate action by international donor community to mobilise the resources necessary to support response programmes.

They called for the “mainstreaming” of disaster risk reduction into national development frameworks with a special attention to food security, and support for social protection programmes to assist the most vulnerable populations.

Under-Secretary-General for Humanitarian Affairs Valerie Amos and UNDP Administrator Helen Clark will tomorrow begin a two-day visit to Niger, one of the worst affected countries in the current crisis. 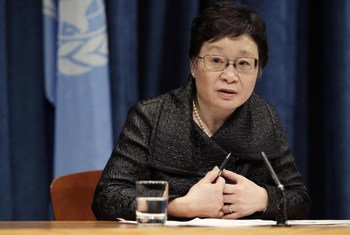 14 February 2012
Two top United Nations officials will travel later this week to Niger, where 5.4 million people are struggling to get enough to eat, part of a wider emergency affecting at least 10 million people across the Sahel region.