IRIN/Adel Yahya
In Yemen, hundreds of families have been displaced in Abyan Governorate, and some are living in the open outside Zinjibar town.
14 February 2012

The number of people that have been affected by ongoing violence in southern Yemen and are dependent on assistance for protection, water and sanitation continues to increase, the United Nations humanitarian wing warned today.

According to the UN Office for the Coordination of Humanitarian Affairs (OCHA), more than 6,000 people have been affected by violence in Yemen, which is facing a humanitarian crisis due to civil unrest, soaring food and fuel prices and a breakdown of social services.

The rate of malnutrition is also worrying, said OCHA spokesperson Elisabeth Byrs during a press briefing in Geneva, as the number of malnourished children who are under five-years old has nearly doubled as a result of political turmoil. Currently, the number of malnourished children stands at 750,000, with half a million at risk of dying this year if adequate support is not provided.

In addition, the education of thousands of children across the country continues to be disrupted by the occupation of schools by armed forces, and there number of internally displaced persons (IDPs) has increased by 7,000 in the past two weeks.

Ms. Byrs stated that assistance and delivery capacity has been able to increase due to the registration of additional international non-governmental organizations (NGOs), including the Norwegian Refugee Council, Action Contre la Faim and the Agency for Technical Cooperation and Development (ACTED). However, she noted that the Yemen humanitarian response plan remains underfunded at $63 million, or only 14 per cent of what was initially requested. 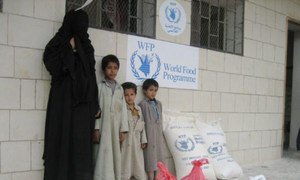 The United Nations World Food Programme (WFP) is set to scale up its assistance in response to the growing needs in Yemen, which it said is in the midst of a full-fledged humanitarian crisis owing to civil unrest, soaring food and fuel prices and a breakdown in social services.