One out of every five Europeans dies from environmentally-related diseases, the United Nations World Health Organization (WHO) warned today, noting that poorer citizens are more exposed to such risks than their wealthier peers.

In a new report, WHO’s European Centre for Environment and Health (ECEH) pointed out that illnesses caused by environmental factors varied significantly throughout Europe, ranging from 14 to 54 per cent, indicating an unequal distribution of risks and poor living conditions across the continent and between economic strata.

In the European Union, for instance, WHO said that of the 80 million citizens living in relative poverty, many were residing in damp housing, with insufficient heating and inadequate sanitary equipment.

The lowest-income population in the new EU member countries, meanwhile, reported having no bath or shower at home 13 times more often than their more affluent compatriots. Overall, more than 16 million people living in relative poverty cannot afford heating their homes in winter.

More than 300 people were reported to have died in Ukraine, Poland, France and Italy due to the recent cold spell which caused temperatures across the region to plummet. Many deaths occurred among the low-income population and in unheated apartments.

Since its founding in 2001, ECEH, which today also launched its expanded operations in Bonn, Germany, has compiled and analyzed scientific data on European health risks caused by a range of other environmental factors, including air pollution, traffic-related noise, and exposure to second-hand smoke. 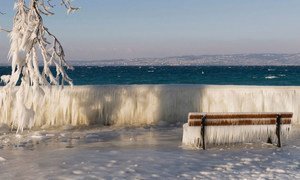 The current cold spell that has paralyzed much of Europe and reportedly killed almost 300 people over the past week should start to ease slowly from next week, a senior official at the United Nations World Meteorological Organization (WMO) said today.