UN refugee agency concerned over treatment of asylum-seekers in Ukraine

The United Nations refugee agency has voiced concern over the plight of asylum-seekers, including some minors, held in two detention centres in Ukraine, where more than 100 people are reportedly challenging their detention or have complained that they were denied the right to apply for asylum.

The UN High Commissioner for Refugees (UNHCR) said in a press release issued yesterday that some of those held in detention centres in the Volyn and Chernigiv regions of Ukraine were sentenced to one-year terms in detention for attempting to cross international borders without proper documents.

Some have claimed to be children or unaccompanied minors from Somalia who, according to UNHCR, should be accorded special attention under international and Ukrainian regulations, said the statement from the office of the UNHCR representative for Belarus, Moldova and Ukraine.

UNHCR has not been able to verify all the allegations and it remains unclear why so many people who claim to be minors would be treated as adults by the Ukrainian authorities.

“Their situation remains problematic even after several visits of UNHCR staff and NGO [non-governmental organization] lawyers and Government officials,” said the UNHCR statement. “To obtain clarity more visits and interviews are scheduled for the coming weeks,” it added.

According to information available to UNHCR, there are also several Afghan families with children detained in Volyn.

UNHCR and the State Migration Service staff visited the detention centre in Volyn jointly on 21 January to meet with the detainees and agreed on a number of steps to redress the situation.

Over the past week, 28 people have submitted applications for asylum to officials in the detention centre in the Volyn. UNHCR has been assured that the applications are being processed.

“UNHCR remains hopeful that the agreements reached will be fulfilled and that all necessary steps will be taken by the responsible authorities to defuse the tense situation in accordance with national law and the international obligations Ukraine assumed,” said the agency’s statement.

The agency, however, said it was concerned over reports received on Monday that riot police had been sent to the detention centre in Volyn. 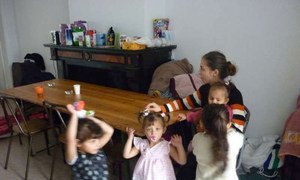 Applications for asylum in developed countries rose by 17 per cent in the first six months of this year, with most of those seeking admission coming from countries with a history of population displacement, the United Nations refugee agency reported today.