Secretary-General Ban today urged Egypt to maintain its commitment to implementing the roadmap to an early transition to a civilian administration, and expressed his satisfaction that the recent legislative elections were generally conducted in an orderly manner.

At a meeting with Egypt’s Foreign Minister Mohamed Kamel Ali Amr on the sidelines of the African Union summit in the Ethiopian capital, Addis Ababa, Mr. Ban noted that the timetable for the presidential elections has been set and expressed the United Nations’ readiness to support an Egyptian-led reform process by proving technical support in capacity building.

They also discussed events in the region, especially Egypt’s cooperation with Libya and the situation in Syria.

Mr. Ban also conferred with President Alassane Ouattara of Côte d’Ivoire during which the UN chief welcomed the generally peaceful environment in which the legislative elections took place last month.

He commended Côte d’Ivoire for its political reintegration in the West African region, and the country’s economic growth achieved so far.

The Secretary-General stressed the need for the Ivorian Government to focus on urgent priorities, including security sector reform, demobilization and reintegration of former fighters and national reconciliation.

He reaffirmed the UN’s commitment to working closely with the Government, including through his Special Representative and the UN peacekeeping operation in Côte d’Ivoire (UNOCI) to address the country’s priorities, including sustainable peace, security and economic recovery.

Separately, Mr. Ban met with the President Hifikepunye Pohamba of Namibia to discuss the country’s support for the UN, especially in peacekeeping operations.

The Secretary-General also had discussions with United States’ Deputy Secretary of State William J. Burns on a wide range of issues, including Sudan, North Africa and Somalia. They also talked about the situation in the Middle East and Iran’s nuclear issue, and Mr. Ban briefed Mr. Burns on his priorities for his second term.

Secretary-General set to travel to Africa next week 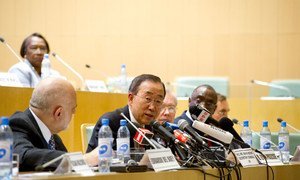