The economic productivity of the marine sector can be significantly boosted by shifting to a more sustainable approach that focuses on green activities such as renewable energy, eco-tourism and sustainable transport, according to a United Nations report released today.

The report by the UN Environment Programme (UNEP), ‘Green Economy in a Blue World,’ looks at six different economic areas in the marine sector and provides recommendations on how to boost their potential by implementing green measures.

“Oceans are a key pillar for many countries in their development and fight to tackle poverty, but the wide range of ecosystem services, including food security and climate regulation, provided by marine and coastal environments are today under unprecedented pressure,” said UNEP Executive Director Achim Steiner.

“Stepping up green investments in marine and coastal resources and enhancing international cooperation in managing these transboundary ecosystems are essential if a transition to low-carbon, resource-efficient green economy is to be realized,” he said.

“This report provides concrete examples of how emerging ocean industries – including ocean energy and aquaculture industries – can become more profitable, more sustainable, and meet the needs of a growing population without sacrificing the health of our fragile ocean ecosystems,” said Linwood Pendleton, one of the contributors to the report and Director of Ocean and Coastal Policy at the Nicholas Institute for Environmental Policy Solutions.

In addition, the report also examines how small island developing States (SIDS), such as those in the Asia-Pacific and Caribbean regions, can take advantage of green economy opportunities to reduce their vulnerability to climate change and promote sustainable growth.

The report seeks to stimulate countries to take action as they prepare for the UN Conference on Sustainable Development (Rio+20) in Brazil in June, according to a news release issued by UNEP.

“In the run-up to Rio+20, this report shows that a shift to a green economy can, if comprehensively implemented, unlock the potential of marine ecosystems to fuel economic growth – particularly in small island developing States but in ways that ensure that future generations derive an equitable share of marine resources and services,” said Mr. Steiner.

The report was produced by UNEP in collaboration with the UN Development Programme (UNDP), the UN Food and Agriculture Organization (FAO), the UN International Maritime Organization (IMO), the UN Department of Economic and Social Affairs (UN-DESA), the International Union for Conservation of Nature (IUCN), the WorldFish Center and GRID-Arendal. 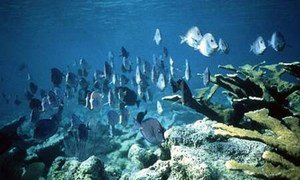 UN agencies to present plan for sustainable future of oceans

Four United Nations agencies have prepared a plan to limit the degradation of oceans and address issues such as overfishing, pollution and declining biodiversity to encourage countries to renew their commitment to improve oceans’ governance, the UN announced today.