Low-income countries need help to enable them to benefit from the added value derived from the agricultural produce and natural resources that are the mainstays of many of their economies, experts attending a United Nations-backed forum said today.

Low-income countries need help to enable them to benefit from the added value derived from the agricultural produce and natural resources that are the mainstays of many of their economies, experts attending a United Nations-backed forum said today.

Speakers at the third Global Commodities Forum, hosted by the UN Conference on Trade and Development (UNCTAD), said that despite a decade’s worth of rising commodity prices, the so-called commodity dependent developing countries (CDDCs) have been unable to benefit from the higher prices, diversify their economies and raise living standards.

The theme of the two-day forum in Geneva is ‘harnessing development gains from commodities production and trade.’

“There has been ongoing debate on diversification for CDDCs. From 2002 to 2010, the number of CDDCs increased from 85 to 91,” said Supachai Panitchpakdi, the UNCTAD Secretary-General, in his address to the forum.

“While we have been trying to find ways to advise countries to be less commodity-dependent, CDDCs have actually become more heavily dependent on commodities exports, and the number of countries that are dependent has increased,” he said.

There is need to use the benefits that come from higher prices for “long-term development purposes,” he said. Royalties and wages earned by developing countries from commodities frequently are only a small portion of the final sales prices of the finished goods made from them. The bulk of the profits accrue overseas, he added.

Mr. Supachai said the mining of natural resources in developing countries, for example, often results in “enclave economies” that do not generate broad economic “spill over” benefits for the producer nations.

Ways should be found “to spawn wider economic activities” coming from mining, he said, so that more of the upgrading of these natural resources occurs domestically, creating jobs with higher wages.

Ibrahim Al-Adoofi, Vice President of the UNCTAD Trade and Development Board, told the meeting that the forum is part of broad efforts to prepare the way for the UNCTAD XIII quadrennial conference to be held in Doha from 21 to 26 April.

“New developments in the global economy have exposed the limitations in our current development model,” said Mr. Al-Adoofi. “It is necessary to steer commodities development efforts in new directions.” 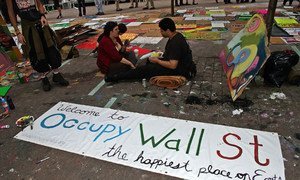 Fiscal austerity policies being implemented by countries are driving the global economy towards a recession, the United Nations trade and development body warned today, stressing that greater attention should be paid to high unemployment, which it called a more pressing problem than budgetary deficits.