10 January 2012
Slovak ambassador Miloš Koterec was elected today to serve as President of the United Nations Economic and Social Council (ECOSOC), one of the six principal organs of the UN and the main body tasked with coordinating work in those two fields worldwide.

Addressing the Council in New York after his election, Mr. Koterec called for a new approach to development during times of economic uncertainty.

“Making ECOSOC a truly meaningful organ that has the capacity to make a difference calls for new approach,” he said. “This is so especially now, during times of hardened economic uncertainty that ECOSOC’s role and relevance is ever-increasing.”

Mr. Koterec, who previously served as a senior vice-president of the Council, said part of this new approach entailed changing old perceptions about development and finding new ways to optimize cooperation among donor and aid recipient countries.

“In 2012, ECOSOC must carve out its niche as the forum for frank, free-flowing discourse on development cooperation,” Mr. Koterec emphasized, adding that the Development Cooperation Forum (DFC), which will be held later this year, would provide an ideal space to do this.

“Gone is the old binary division where rich nations dispense aid and poor ones receive it,” he said. “Fewer countries are destitute and thus eligible for cheap loans. At the same time, two-thirds of the world’s poorest people now live in middle-income countries.

In his statement, Mr. Koterec also discussed the Annual Ministerial Review in July, which this year will tackle the issue of creating jobs to eradicate poverty and spur sustainable economic growth. Mr. Koterec stressed that for the event to be a success, the participation of non-government entities such as academia, foundations and corporations is needed.

The issue of sustainable development is also priority for ECOSOC, Mr. Koterec said, adding that the Council would take an active role in following-up with the outcome of the UN Sustainable Development Conference (Rio+20).

“I strongly believe that ECOSOC is well placed and well equipped to become the central place for follow-up to Rio+20. No other body, whether existing or new, has the wherewithal for integrating the economic, social and environmental pillars,” he said.

Mr. Ban also underscored the role of the Council in supporting sustainable development initiatives as well the five global imperatives he outlined in September which include empowering young people, building a safer world, preventing natural disasters and supporting countries in transition.

“We must deepen our efforts to achieve the internationally agreed development goals, including the Millennium Development Goals (MDGs), our main framework for development to 2015. We must intensify our efforts to ensure a successful outcome at Rio,” he said.

“We also need to reflect on and plan for the Post-2015 development agenda, perhaps with a new generation of goals that reflect the sustainability dimension. The Council has a critical role to play on all of these issues, as well as the continuing challenge of climate change.”

Mr. Koterec is taking over the presidency from Lazarous Kapambwe from Zambia, who also addressed the Council and highlighted the work done during his tenure. In particular, Mr. Kapambwe stressed the importance of having focused on education, which he called “the key to self-employment” in a year of economic unrest marked by high unemployment, as well as several political liberation movements in different parts of the world. 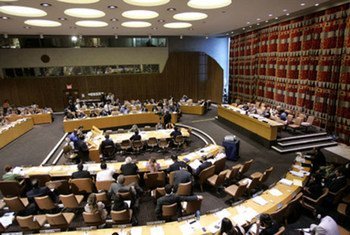 24 October 2011
Twenty-one countries were today elected to serve on the Economic and Social Council (ECOSOC), one of the six principal organs of the United Nations and the main body tasked with furthering economic and social cooperation and development worldwide.