The head of the United Nations World Food Programme (WFP) announced today that she will step down after five years at the helm of the Rome-based agency.

During her mandate as Executive Director of WFP, Josette Sheeran led the agency in helping victims of conflict and natural disasters in over 70 countries worldwide, according to a statement released by her office.

Ms. Sheeran also oversaw the agency’s “transformation from food aid to food assistance,” with WFP now buying 80 per cent of its food from the developing world and using tools such as mobile telephones and vouchers to help deliver food assistance.

“It has been a deep honour to serve the world in this role and to help not only save lives but to transform the face of food aid, to empower lasting hunger solutions,” said Ms. Sheeran.

In a statement released by his spokesperson, Secretary-General Ban Ki-moon expressed his appreciation for Ms. Sheeran’s leadership, saying she was “an outstanding advocate for the United Nations and a champion of the world’s poorest and most vulnerable people.”

Under Ms. Sheeran’s leadership, WFP increased its donor base to more than 100 nations – including members of the so-called BRIC nations (Brazil, Russia, India, and China) – while also bringing in the private sector as one of the agency’s top 10 overall donors.

Ms. Sheeran will move on to assume the role of Vice Chairman of the World Economic Forum, an independent organization best known for its annual gathering in January in Davos, Switzerland, that brings together government ministers, business leaders and others. 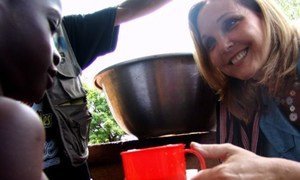 The head of the United Nations World Food Programme (WFP) stressed today the importance of providing more support to fragile countries, adding that new agreements reached during this week’s aid effectiveness forum in the Republic of Korea (ROK) would help build trust and achieve better results for vulnerable populations.