30 December 2011
The United Nations peacekeeping mission in South Sudan (UNMISS) has deployed a battalion of troops in the town of Pibor in Jonglei state, which is under imminent attack by an estimated 6,000 armed men from one of two feuding communities in the area, a UN official said today.

“The situation in Jonglei is very worrying,” said Lise Grande, the UN Deputy Humanitarian Coordinator for South Sudan, in an interview with UN Radio. “There are 6,000 armed youth from one of the Jonglei tribes, the Lou Nuer, that is marching on the town of Pibor where another community, the Murle community, are concentrated.

“We deemed that there was a very serious risk to civilians [and] in support of the Government of South Sudan’s primary responsibility to protect civilians, we have gone ahead and deployed a battalion-size force in Pibor with the aim of deterring violence and helping the Government to protect its own people,” she said.

On Wednesday, Secretary-General Ban Ki-moon voiced deep concern over the continuing ethnic tensions in Jonglei. Echoing comments earlier in the week by Hilde Johnson, the head of UNMISS, Mr. Ban urged the leadership of both groups to cease violence and to work with the Government towards a long-term solution to the root causes of the hostilities.

Several days ago, Lou Nuer fighters raided the town of Lukangol, sending thousands of civilians fleeing towards Pibor, Ms. Grande said. An estimated 500 members of the 6,000-strong column of armed men is now on the outskirts of Pibor, she added.

“We were so alarmed by the situation that during the course of the afternoon we have reinforced our positions in Pibor. All this is in support of the Government of South Sudan’s primary responsibility to protect. We are there to help them do that.”

She said the Government had also deployed a battalion of its army, the Sudan People Liberation Army (SPLA), inside Pibor, and that the troops had also taken up positions in the town’s periphery to deter an attack.

South Sudan’s Vice President, Riek Machar, is also leading an initiative to bridge the differences between the Lou Nuer and the Murle communities, including encouraging the armed men to disband and go home, Mr. Grande said.

Jonglei state has been blighted by a series of reprisal attacks between the two communities, which have a history of animosity over grazing land, water sources and cattle raids during which women and children are often abducted.

“There are a whole host of concerns that have separated these communities and it is very important that the Government is taking the initiative to find a way to bridge these grievances and to stop the violence altogether,” said Ms. Grande.

She said that despite UNMISS’ “quick” and “robust” deployment in Pibor, the mission faces considerable logistical challenges, particularly the shortage of helicopters.

“Basically the only way into Pibor at the moment is by air,” said Ms. Grande. “We did manage two days ago to get two armoured personnel carriers into the town, but it took them more than a day and half to arrive.”

“The convoy of trucks that we were using to try and reinforce our troops… simply didn’t make it – they got stuck in the mud and they couldn’t enter the town. At this point our only way in to support our troops on the ground is through air assets, however, the mission simply doesn’t have sufficient number of air assets… it’s a major constraint and it is affecting our operational effectiveness on the ground,” she said.

More than 1,000 people are estimated to have been killed in ethnic clashes within South Sudan this year, with Jonglei one of the states worst affected by the violence. Thousands more civilians have been displaced from their homes. 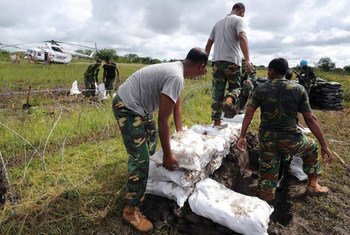 28 December 2011
Secretary-General Ban Ki-moon expressed deep concern today about continuing ethnic tensions in South Sudan’s Jonglei state, where there are reports of fresh rounds of deadly clashes and claims that thousands of armed youth are preparing to attack members of a rival community.