Judges in Kyrgyzstan must ensure that the civil rights of defendants are protected, a top United Nations official stressed today, after the Supreme Court upheld the conviction and life sentence of an activist who reported being tortured in detention and whose right to a fair trial was violated.

High Commissioner for Human Rights Navi Pillay voiced deep regret at the decision taken on Tuesday by the Kyrgyz Supreme Court in the case of human rights defender Azimjan Askarov.

Mr. Askarov was sentenced to life imprisonment and confiscation of his private property in November 2010 for the murder of a police officer, participation and organization of mass riots and incitement to inter-ethnic hatred.

His arrest is believed to be related to his peaceful activities as a human rights defender, particularly his documentation of inter-ethnic violence in the Jalal-Abad region in June 2010, according to a news release issued by the High Commissioner’s office (OHCHR).

Since their arrest, Mr. Askarov and some of his seven co- defendants have reportedly been subjected to torture and inhuman and degrading treatment by police on several occasions. Mr. Askarov reported having been repeatedly and severely ill-treated, including inside the court building. The torture allegations were raised at all stages of the criminal proceedings but no investigation was initiated.

“It is particularly alarming that the judges failed to consider the defendants’ claims that confessions had been extracted under duress,” stated Ms. Pillay.

“Judges in Kyrgyzstan must ensure that the civil rights of defendants are protected, particularly when there are allegations of torture,” she stressed.

Under international human rights law, allegations of torture must be promptly and impartially investigated by competent authorities, including judges and prosecutors. Evidence, including confessions, extracted through coercion, must be excluded by the court.

OHCHR noted that there are “strong indications” that a significant number of defendants in cases relating to the June 2010 inter-ethnic violence in Kyrgyzstan were subjected to torture and ill-treatment to force confessions later admitted as evidence in court.

“The Supreme Court of Kyrgyzstan must ensure that in those cases where inadmissible evidence might have been used, verdicts rendered by lower courts are reversed and criminal cases are dismissed or sent for retrial,” said Ms. Pillay.

“Criminal investigations should be conducted to hold the perpetrators of torture and ill-treatment accountable, and victims should be provided with adequate compensation.”

Mr. Askarov’s trial represents the serious problems with the administration of post-conflict justice in Kyrgyzstan following the June 2010 violence, OHCHR points out. More than 5,000 related criminal cases have been initiated, but most such trials monitored by the UN human rights office have failed to meet fair trial standards.

Defendants have had inadequate access to lawyers and family members, while defence lawyers have been denied access to documents, undermining their ability to defend their clients. In addition, appeals court hearings have been marred by intimidating statements, including ethnicity-based obscenities targeted at defendants. In some cases, judges have allowed such statements to go unchallenged.

“Judges are the guarantors of the rule of law and I urge them to conduct their important work strictly in line with the Kyrgyz Constitution and applicable international human rights standards,” the High Commissioner stated.

♦ Receive daily updates directly in your inbox - Subscribe here to a topic.
♦ Download the UN News app for your iOS or Android devices.
kyrgyz 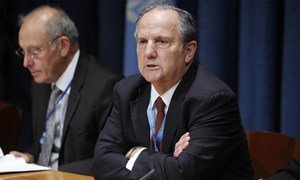 An independent United Nations human rights expert has urged the Kyrgyz Government to prevent abuses, torture and ill-treatment, and to end impunity by ensuring that alleged perpetrators are held responsible.