Developing countries are at higher risk of being the target of cyberattacks, a United Nations-led forum on cybersecurity heard today, where experts discussed ways to mitigate this phenomenon at the national and international levels.

“The economic impact and consequences of cyberattacks against critical physical infrastructure, the banking system, national health systems, essential government and industry databanks and services could be extremely high,” said Lazarous Kapambwe, President of the UN Economic and Social Council (ECOSOC), in his opening remarks at the Special Event on Cybersecurity and Development that was held at UN Headquarters.

Mr. Kapambwe stressed that because of the ubiquity of information and communication technologies (ICTs) in everyday life, the impact of cyberattacks is magnified, and appropriate measures to prevent them must be put into place.

“Cyberattacks have the potential for triggering inter-State and other conflicts which can put the entire development process at considerable risk. Developing countries, with relatively weak surveillance capacity are most vulnerable to such cyberattacks,” he said.

According to the UN International Telecommunication Union (ITU), there are six billion mobile cellular subscriptions worldwide and more than 2.3 billion people online, making ICTs a powerful tool to advance development.

Developing countries are using ICTs to advance their development agenda, Mr. Kapambwe said, “because of their relevance in transforming human activities and in presenting new opportunities for economic growth.

“Mobile phones and the Internet have had beneficial impacts on supporting the livelihoods of rural people, particularly farmers in Asia. In Africa, mobile phones are the most widely-used form of communications technology,” he said.

However, their use exposes users to a myriad of risks, and the “full benefits of the digital age” will not be reaped if cybercrime is left unaddressed, he said.

“Governments, the private sector and civil society, must all work to improve cybersecurity,” he said, emphasizing that they need to work in conjunction because of the cross-border nature of the issue.

Among those participating in the forum were ITU Secretary-General Hamadoun Touré and the Chair of the UN Commission on Science and Technology for Development, Fortunato de la Peña, who set the stage for a panel discussion addressing the topic of building an international framework to combat cybercrime and improve cybersecurity.

“In the 21st century, we are absolutely dependent on ICT networks,” he said. “We are all vulnerable.”

He echoed Mr. Kapambwe’s remarks, saying cybersecurity should be of particular concern for developing countries, pointing out that some of the States with the most cyberattacks include Brazil, China, India and Russia, all emerging economies.

ITU currently has a programme in conjunction with the International Multilateral Partnership Against Cyber Threats (IMPACT) which provides expertise, facilities and resources to countries to prevent, defend against and respond to cyberthreats.

Last week, the ITU-IMPACT Alliance carried out a cyberdrill which involved testing the response technologies of Cambodia, Laos, Myanmar and Viet Nam.

In addition, the ITU has established a partnership with the UN Office on Drugs and Crime (UNODC) to assist Member States in mitigating the risks posed by cybersecurity and cybercrime through activities such as joint workshops, capacity building, and knowledge-sharing.

♦ Receive daily updates directly in your inbox - Subscribe here to a topic.
♦ Download the UN News app for your iOS or Android devices.
cyber

Half of all countries aware but lacking national plan on cybersecurity, UN agency reports 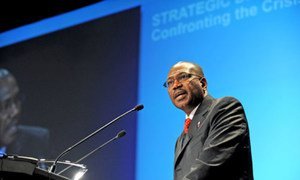 Mass web destruction, spam and malware infection were among the scenarios involved during the first cross-border cyber drill organized by the United Nations and an international partnership against online threats in South-east Asia that aims to build cooperation and improve response measures to cyber attacks.