The cooperation of States, whether in tracking and arresting fugitives or providing information, is vital to the ability of the United Nations war crimes tribunals for the former Yugoslavia and Rwanda to complete their mandates, top officials said today.

Some 17 years after its establishment, nine fugitives – including the most high-ranking accused –sought by the International Criminal Tribunal for Rwanda (ICTR) are still at large, Prosecutor Hassan B. Jallow said in a briefing to the Security Council.

“Tracking and arrest of the remaining nine fugitives remains a major challenge for a timely and proper completion by the ICTR,” said Mr. Jallow, who has continued to engage with relevant States to secure their cooperation in this matter.

“I am hopeful that with greater cooperation from Member States of the Great Lakes Conference the many fugitives located in the territories of the Conference will be arrested and brought to account, thereby serving the interests of both global justice as well as regional peace and stability.”

He called on Kenya to cooperate fully with the ICTR to arrest and transfer Felicien Kabuga. Meanwhile, difficulties continue, he said, with the apprehension of Protais Mpiranya, who, according to reliable information received by the tribunal, is in Zimbabwe.

This year saw the arrests of the last two remaining fugitives wanted by the International Criminal Tribunal for the former Yugoslavia (ICTY) – Ratko Mladic and Goran Hadžic. As a result, none of the 161 persons indicted by the tribunal, which is based in The Hague, remain at large.

“The arrests mean that no individual has ultimately escaped the ICTY’s reach and the final impediment to completing our mandate has been removed,” said the Prosecutor, Serge Brammertz.

“The arrests also mean that an important and problematic chapter in Serbia’s cooperation with the ICTY has been closed, even if it took too long and redress for the victims was much too delayed,” he added.

Mr. Brammertz noted that with the last two fugitives in custody, the tribunal is now fully occupied with finishing its trials and appeals, and its completion strategy is fast becoming a reality.

“As long as we have ongoing cases, the cooperation of States, particularly in the former Yugoslavia, will be essential,” he stressed. In the case of Serbia, the arrest of the final two fugitives has put its cooperative relationship with the tribunal on a “new, more positive” footing.

With no ongoing trials involving Croatian accused persons, the Prosecutor’s Office is making far fewer requests for assistance to the Croatian authorities, and the limited requests that were made were adequately dealt with by the authorities.

However, Mr. Brammertz expressed concern over statements by high-level Croatian authorities that question the validity of the ICTY’s work, including officials at the highest level continuing to glorify illegal war-time conduct and questioning the impartiality of the court’s judgements.

Regarding Bosnia and Herzegovina, he reported that day-to-day cooperation with his office is proceeding well. At the same time, the National War Crimes Strategy is struggling and urgent action is required to turn the situation around, he added.

The Presidents of the ICTR and ICTY, Judge Khalida Rachid Khan and Judge Theodor Meron, also addressed the 15-member body on the work of their respective courts.

♦ Receive daily updates directly in your inbox - Subscribe here to a topic.
♦ Download the UN News app for your iOS or Android devices.
Criminal Tribunal 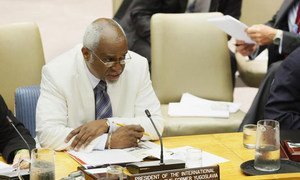 The United Nations tribunals tasked with ending impunity for genocide and war crimes in the former Yugoslavia and Rwanda have made great progress in the last year towards completing their work, but need help in retaining experienced staff, the presidents of the courts told the General Assembly today.