The United Nations body tasked with combating the spread of HIV/AIDS and the United States scheme that funds global efforts against the pandemic today launched a five-year action framework to accelerate the scaling up of voluntary medical male circumcision as a prevention measure in Africa.

The United Nations body tasked with combating the spread of HIV/AIDS and the United States scheme that funds global efforts against the pandemic today launched a five-year action framework to accelerate the scaling up of voluntary medical male circumcision as a prevention measure in Africa.

“Voluntary medical male circumcision is a high-impact and cost-effective prevention tool that will bring us one step closer to our goal of an HIV-free generation,” said Michel Sidibé, the Executive Director of the Joint UN Programme on HIV/AIDS (UNAIDS), when he unveiled the action framework, a partnership with the US President’s Emergency Plan for AIDS Relief (PEPFAR).

“Each HIV infection averted is money in the bank and fiscal space for the future,” he said at the 16th International Conference on AIDS and STIs (sexually transmitted infections) in Africa (ICASA) in the Ethiopian capital, Addis Ababa, where the initiative was launched in the presence of the US Global AIDS Coordinator Eric Goosby and former President of Botswana, Festus Mogae.

The action framework – developed by the UN World Health Organization (WHO), UNAIDS, PEPFAR, the Bill & Melinda Gates Foundation and the World Bank in consultation with national health ministries – calls for the immediate roll-out and expansion of voluntary medical male circumcision (VMMC) services in 14 priority countries in Eastern and Southern Africa.

Voluntary medical male circumcision has been found to reduce the risk of sexual transmission of HIV from women to men by about 60 per cent when carried out by well-trained health professionals. Since 2007, WHO and UNAIDS have urged countries with high HIV prevalence and low levels of male circumcision to expand access to safe VMMC services.

Recent modelling commissioned by PEPFAR and UNAIDS found that reaching 80 per cent coverage of adult VMMC in the 14 priority countries would entail performing about 20 million circumcisions on men aged between 15 and 49 by 2015.

Such a scale-up would cost a total of $1.5 billion and would result in a net savings of $16.5 billion by 2025 due to averted treatment and care costs. An estimated 3.4 million new HIV infections would be averted through 2025.

Efforts to accelerate VMMC have, however, seen modest success in most of the priority countries. According to the joint framework, more than 550,000 men between the ages of 15 and 49 had been circumcised in the 14 priority countries by the end of last year.

The greatest success in scaling up adult VMMC occurred in Kenya, particularly in Nyanza province in the country’s west.

While progress in implementing VMMC programmes has been more limited in the other priority countries, nearly all countries saw the pace of the scale-up quicken in 2010, UNAIDS points out.

“VMMC offers men an unprecedented opportunity to assume a proactive role in reducing their risk of contracting HIV, empowering them to protect their health and the health of their partners.”

Mr. Mogae urged leaders in the 14 priority countries to support and scale up VMMC programmes.

“Strong collaboration between political, traditional and religious leadership will be critical to the safe and effective scale up of VMMC services,” said Mr. Mogae, who is the chairman of Champions for an HIV-Free Generation, a non-governmental organization (NGO).

“The key role of religious and traditional leaders is to ensure that there is a working partnership with the communities so that while the circumcision is done medically as an add-on HIV prevention strategy, it still retains its religious or cultural significance to the communities,” he added. 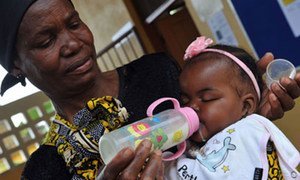