A senior United Nations official has urged donors to increase funding for de-mining efforts in Libya, where mine action teams are striving to clear landmines and other explosive remnants of war after the recent conflict to ensure that the weapons do not harm civilians.

“Good progress has been made so far, but mine action organizations are stretched to the limit with many priority areas as yet unassessed,” said Georg Charpentier, UN Resident and Humanitarian Coordinator for Libya, when yesterday he visited an area near the city of Misrata where mine action work is under way.

“Further funding is necessary for operations to continue into the new year and to capitalize on the investment already made in equipment and training,” he said.

Mine clearance teams have so far removed a total of 77,943 items of unexploded ordnance and conducted mine risk education for more than 26,623 people. However, the area covered is just a fraction of contaminated areas and the key challenge remains the capacity of clearance teams, which are facing funding shortfalls, to scale up their work.

Mr. Charpentier stressed that international funding of mine action programmes will be required until the Libya’s own financial resources become available.

He also visited an ammunition storage area and a local exhibition featuring interactive mine risk education presentations by two partner non-governmental organizations (NGOs). He was accompanied by the liaison officer of the National Transitional Council’s (NTC) Joint Mine Action Coordination Team, the programme manager of the UN Mine Action Service (UNMAS) in Libya and representatives of UN agencies and NGOs.

The NTC declared the full liberation of Libya on 23 October, eight months after the start of the popular uprising against the regime of long-time ruler Colonel Muammar al-Qadhafi, who was eventually captured and killed. 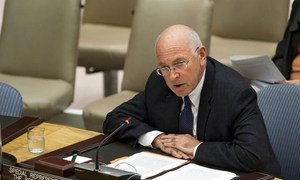 Most pressing task for Libya is consolidation of security, UN envoy reports

Libya’s interim Government faces a number of challenges as it seeks to move past the recent conflict and decades of dictatorship, the most immediate of which is consolidating security, the top United Nations envoy to the country said today.