Insecurity and conflict due to insurgency is now one of the main causes for displacement in Somalia’s capital, Mogadishu, the United Nations refugee agency said today, warning that constant fighting is also hampering aid efforts in the country.

Insecurity and conflict due to insurgency is now one of the main causes for displacement in Somalia’s capital, Mogadishu, the United Nations refugee agency said today, warning that constant fighting is also hampering aid efforts in the country.

“In Mogadishu, we noted a profound change in the root causes driving forced displacement,” said Andrej Mahecic, spokesperson for the Office of the High Commissioner for Refugees (UNHCR). “While drought accounted for the vast majority of displacement in the Somali capital during the first three quarters of the year, as of October we have seen 8,300 people displaced by conflict and just 500 displaced as a result of drought.”

Mr. Mahecic told reporters in Geneva that conflict and military activity were also affecting people’s access to food in other areas in the southern part of the country such as Qooqaani, Tabta and Afmadow, where some 500 people, including children, have left their homes and are travelling by foot to the border town of Dobley, where a number of agencies are distributing food and providing assistance.

UNHCR said this movement of people has happened in spite of the heavy rains which have limited movement in the southern and central parts of the country, while also adding that many people are still reluctant to move, fearing ambushes or getting caught in the crossfire.

Somalia faces a dire humanitarian situation, having endured a drought and famine as well as continued fighting and heavy rains this year, all of which have aggravated the conditions of its estimated 1.46 million internally displaced persons (IDPs).

Conflict is also preventing UN agencies from delivering assistance. UNHCR, the UN Children’s Fund (UNICEF) and the World Health Organization (WHO) all expressed concern today about the announcement by insurgent group Al-Shabaab that it would permanently revoke work permissions to several UN organizations in parts in Somalia under their control.

UNICEF and WHO reported that their offices have been raided and occupied, and said they are currently assessing the impact of these actions on their work.

Fighting and insecurity is also affecting refugee camps in neighbouring Kenya, with UN staff reporting that they have been unable to assess the number and condition of new arrivals to the Dadaab complex. However, despite restrictions on movement, authorities have managed to complete an oral polio vaccination campaign for all refugee children less than five years of age.

UNHCR also reported that more than 360 refugees in the camp have been affected by cholera and acute watery diarrhoea, adding that efforts to enhance security measures are being taken so assistance can be delivered as soon as possible.

In addition, the agency said it would increase its efforts in the Dollo Ado camps in Ethiopia as there is a high rate of severe acute malnutrition among resident children under the age of five. In response, UNHCR and partners are expanding their wet feeding programme to all children up to the age of 10, and adding milk powder to porridge to boost nutrient levels. 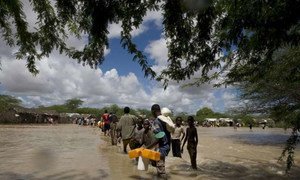 United Nations humanitarian agencies announced today that they are stepping up their support for Somalia as the country faces the combined impact of heavy rains, widespread famine and continuing insecurity in the streets.