Most pressing task for Libya is consolidation of security, UN envoy reports

Libya’s interim Government faces a number of challenges as it seeks to move past the recent conflict and decades of dictatorship, the most immediate of which is consolidating security, the top United Nations envoy to the country said today.

It has been just over a month since the National Transitional Council (NTC) declared the full liberation of Libya, and more than nine months after the start of the popular uprising against the regime of long-time ruler Colonel Muammar al-Qadhafi.

Over the course of the past month, the NTC approved the interim Government headed by Prime Minister Abdurrahim El-Keib.

“They know that they now face great challenges, requiring effective central as well as local governance,” Ian Martin, the Secretary-General’s Special Representative and head of the UN Support Mission in Libya (UNSMIL), said as he briefed the Security Council on the latest developments.

“The first and foremost of immediate challenges is in the area of security,” he added, noting that this includes determining the future of the revolutionary fighters. Another major security issue is the presence and proliferation of conventional and non-conventional weapons and related materiel.

Of particular concern, said Mr. Martin, is the large number of MANPADS [man-portable air defence systems] and ammunition still unaccounted for, which pose both a disarmament problem for Libya and a proliferation risk for the region. Libya has accumulated the largest known stockpile of MANPADS outside those countries that produce such systems.

“The Government will need a little time to work out the different responsibilities of its ministries and other bodies in addressing all these tasks across the security sector – integration and demobilization, training and development of police and a new army, weapons control and border management – but there is no doubt about its sense of urgency,” said the envoy.

He added that the security situation and the way in which it develops in the near future cannot be separated from Libya’s urgent need for liquid funds, noting that “the stabilization of the country, the success of the Government and the perception of the international community are all at stake.”

Mr. Martin told reporters after the briefing that among issues that “were subject to a good deal of discussions” in the Council included the need to ensure that the new Libyan Government “had at its disposal the funds that it requires to address urgent priorities.”

There was also concern, expressed both in the Secretary-General’s report and in his briefing, over detentions and the treatment of migrant workers.

“I made it clear that it is a very high priority [and] we have already pressed the issues with ministers in the new Government,” he said.

The NTC is committed to a first election within eight months, a challenging timeline, Secretary-General Ban Ki-moon notes in his report, in a country where there has been limited or no electoral experience in over 45 years.

The UN has continued to stress that for credible elections for a National Congress to be held by June 2012 early decisions have to be made on a range of issues, said Mr. Martin. Among them are the electoral system, the eligibility of candidates and voters, and the authority, composition and appointment of the electoral commission.

“The challenge of national reconciliation is of overwhelming importance,” writes Mr. Ban. “However deep the anger at the war crimes committed by the former regime, the National Transitional Council must continue its calls to avoid acts of revenge and must investigate abuses by its own fighters.

“I believe that the leaders of the new Libya are truly committed to building a society based on respect for human rights. However difficult the circumstances, it is essential to take the earliest possible action to end arbitrary detention and prevent abuses and discrimination against third country nationals and against any group of Libya’s own citizens,” he states. 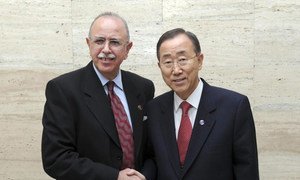 Secretary-General Ban Ki-moon today welcomed the formation of the new interim Government in Libya and congratulated Prime Minister Abdurrahim El-Keib and members of his cabinet.