Global food production is being undermined by land degradation and shortages of farmland and water resources, making feeding the world’s rising population – projected to reach nine billion by 2050 – a daunting challenge, the United Nations Food and Agriculture Organization (FAO) said in a report unveiled today.

The past five decades have witnessed a significant rise in food production, but in many places the better yields have been associated with agricultural practices that have degraded the land and water systems, according to FAO’s State of the World’s Land and Water Resources for Food and Agriculture (SOLAW) report.

Farming systems “face the risk of progressive breakdown of their productive capacity under a combination of excessive demographic pressure and unsustainable agriculture use and practices,” says the report.

Competition for land and water is increasing – including competition between urban and industrial users – as well as within the agricultural sector between livestock, staple crops, non-food crop, and biofuel production.

Climate change is expected to alter the patterns of temperature, precipitation and river flows upon which the world’s food production systems depend, according to the report, which also notes that the problem could be more acute in developing countries, where quality land, soil nutrients and water are least abundant.

“The SOLAW report highlights that the collective impact of these pressures and resulting agricultural transformations have put some production systems at risk of breakdown of their environmental integrity and productive capacity,” said Jacques Diouf, the FAO Director-General.

“These systems at risk may simply not be able to contribute as expected in meeting human demands by 2050. The consequences in terms of hunger and poverty are unacceptable. Remedial action needs to be taken now,” he added.

Between 1961 and 2009, the world’s cropland grew by 12 per cent, but agricultural production expanded 150 percent, thanks to a significant increase in yields of major crops, the report says.

One of the warning signs pointed out in the study is that rates of growth in agricultural production have been slowing in many areas and are currently only half of what they were at the height of the ‘Green Revolution’ – the period between the 1940s and the late 1970s when the world’s agricultural productivity rose dramatically.

Overall, the report paints a picture of a world experiencing an increasing imbalance between availability and demand for land and water resources at the local and national levels.

The report for the first time provides a global assessment of the state of the planet’s land resources.

A quarter of the land is highly degraded, while another eight per cent has moderate degradation, 36 per cent is classed as stable or slightly degraded and 10 per cent ranked as “improving.”

The rest of Earth’s land surface is either bare (around 18 per cent) or covered by inland water bodies (around two per cent).

Large parts of all the continents are experiencing land degradation, with particularly high incidence noted along the west coast of the Americas, across the Mediterranean region of Southern Europe and North Africa, the Sahel and the Horn of Africa, and throughout Asia.

The greatest threat is the loss of soil quality, followed by biodiversity loss and water resources depletion, the report notes. 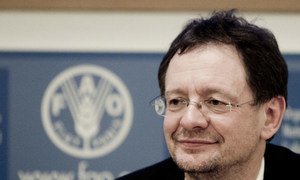