Between 60 and 200 Sudanese refugees have been arriving daily at a camp in Yida in South Sudan’s Unity state after fleeing fighting in Sudan’s Southern Kordofan state, Melissa Fleming, spokesperson for the UN High Commissioner for Refugees (UNHCR), told reporters in Geneva.

Around 23,000 people are already sheltering in Yida, which was the scene of air strikes last week. UN agencies and their partners continue to provide services in Yida, including food, water, sanitation, basic health care and special assistance to the most vulnerable refugees.

Since the influx started in August, UNHCR has been urging the residents of Yida camp to move further away from the unsafe border area.

“We have prepared a site for them further south in Unity state, but the refugees are reluctant to move as they are worried about family members still in Southern Kordofan and prefer to stay closer to their homes,” said Ms. Fleming.

She said the agency is ready to assist in moving refugees who are willing to relocate to areas considered safer from military activities as soon as roads affected by heavy rainfall become passable again.

However, UNHCR’s attempts to relocate refugees from Yida are being hampered because of the presence of landmines that have recently been found on roads in Unity state.

In addition to the refugees in Unity state, South Sudan is also seeing thousands of refugees crossing from Sudan’s Blue Nile state. Ms. Fleming said some 1,200 refugees are arriving every day, and between 5,000 and 7,000 refugees are believed be in the border area.

“We are working to move them to safer locations,” she stated, adding that UNHCR is bringing in additional relief items to cope with the influx of refugees.

Increasing tensions in the border areas between Sudan and South Sudan have driven thousands of civilians to flee their homes since June, and various refugee sites have been established in South Sudan and Ethiopia to provide shelter, food and basic services to those affected by the violence.

UN officials have in recent weeks called on both Sudan and South Sudan to take all necessary steps to de-escalate the situation and protect civilian lives. 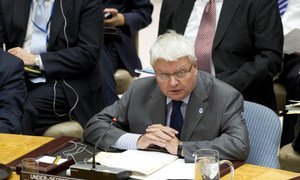 UN calls for probe into Sudanese bombing of refugee camp

Sudanese military forces have bombed a refugee camp in neighbouring South Sudan, the United Nations confirmed today, calling for an urgent investigation into what its top human rights official warned could amount to “a serious international crime.”