Deputy Secretary-General Asha-Rose Migiro today called for greater effort to raise the number of women holding senior positions at the United Nations, saying that the majority of them remain in the lower ranks although more women are now being hired to fill management posts.

Since Secretary-General Ban Ki-moon took office in 2007, he has nearly doubled the number of women at or above the level of Assistant-Secretary-General, including Special Representatives, from 21 to 38, as of September this year, Ms. Migiro pointed out when she addressed a meeting of the Group on Equal Rights for Women at the UN.

Over the same period, the number of women at the level of Under-Secretary-General rose from eight to 19, she said.

“The Secretary-General has told all senior managers that he expects them to appoint qualified women to senior positions. This is good news – but we cannot stop until we have full equality.”

The increase of women in the professional or higher categories, overall, averaged only 0.8 per cent each year over the past three years, she pointed out.

“To put that into perspective, at this rate, gender parity would take not months, not years – but decades. There has been real progress in some areas – and near stagnation in others.

“Increases are happening mostly at the junior levels. Women represent more than half of all P2s [professional category level 2] – or 57 per cent. But bringing more women in at lower levels is not resulting in more women at the top,” said Ms. Migiro.

In its efforts to address the gender parity problem, Ms. Migiro suggested that the UN listen to women who have left the Organization before reaching leadership positions. “It is crucial that we hear directly from the affected women – and respond with concrete changes.”

She also called for greater attention to making the working environment positive for all staff.

“Outside the United Nations, especially in the private sector, more and more workplaces are recognizing that people need flexibility. Employers are coming to understand they need to focus on what their staff achieve rather than the specific hours they work. Our UN staff handle many outside pressures on top of their official duties,” she added. 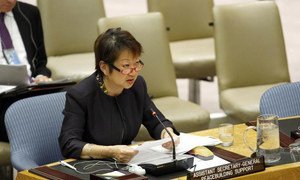 Ignoring the role that women can play in peacebuilding increases the chances of failure for sustainable peace processes, a United Nations official said today, adding that recent efforts to include them are slowly leading to progress in various countries.