Security and logistics are among the biggest challenges facing Côte d’Ivoire as it prepares for legislative polls next month, the top United Nations envoy there said today, after he met with the head of the country’s electoral authority.

“It is important that all Ivorians in whichever region they will be voting feel they are included and that there is maximum security. People must feel that they are voting in fair and transparent elections,” stated Bert Koenders, the Secretary-General’s Special Representative for Côte d’Ivoire.

“This has to be done by including all Ivorians in the organization of the polls up until polling day,” added Mr. Koenders, who is also head of the UN peacekeeping operation in Côte d’Ivoire (UNOCI).

The Special Representative, who is tasked with certifying the 11 December elections, met in Abidjan with Youssouf Bakayoko, the chairman of the Independent Electoral Commission (IEC), which is organizing the polls.

“We discussed what we had to do to ensure the smooth holding of the elections,” Mr. Koenders told reporters after the meeting, adding that it was important for him to meet with the IEC chief “to see if everything is going well and if there is anything that can be improved.”

He has also been meeting with leaders of various political parties. “All these discussions give me an idea of what they are expecting from these elections,” said the envoy, who took up his post in October.

UNOCI is providing human resources, equipment, logistics and security support for the elections, which will be the first to be held in the West African nation since the end of the post-electoral crisis that followed last year’s presidential election.

The legislative elections are among a number of key post-crisis tasks facing the country that also include the restoration of law and order, national reconciliation and economic recovery. 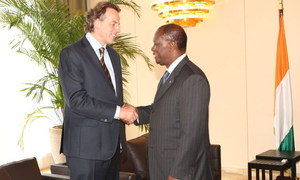 Upcoming Ivorian election must be transparent and inclusive – UN envoy

The United Nations envoy to Côte d’Ivoire today appealed to all actors to do their best to ensure that the upcoming legislative elections are as transparent and inclusive as possible.