President Ellen Johnson-Sirleaf of Liberia, speaks at the 65th General Assembly in September 2010

10 November 2011
Liberia's President, Ellen Johnson Sirleaf, today stressed that the United Nations will continue to play a crucial role in the country, with development support becoming the main focus of the Organization's programmes as the need for humanitarian assistance and peacekeeping recedes.

“UN agencies will play a very important role in all the different spheres of operation that will add to our capacity, that will supplement our resources, so we can scale up the development work we are doing to be able to respond to the basic needs of the people,” Ms. Johnson Sirleaf told UN Radio in an interview after the run-off round of presidential elections in the West African country.

“We will be moving away from a lot of humanitarian assistance and confidence-building measures,” Ms. Johnson Sirleaf said. “We will work with the agencies and programmes of the UN system on an appropriate exit strategy for the UN peacekeeping force.”

She said she envisioned engagement “that will focus on development like agriculture through the UN Food and Agriculture Organizations (FAO) and capacity-building through the United Development Programme (UNDP). The UN Children's Fund (UNICEF) has been very important in our programmes – they all have a role to play,” she said.

Media reports indicate that Liberia's National Electoral Commission had declared Ms. Johnson Sirleaf the winner of Tuesday's presidential run-off poll after garnering more than 90 percent of the vote, while her challenger, Winston Tubman, withdrew from the second round alleging that the first was not fair. Ms. Johnson Sirleaf told UN Radio that Mr. Tubman had the right to challenge the elections results, but that she was certain that the results would stand because they met the requirement of the country's constitution and elections laws.

“As a Nobel laureate, of course, I have to go the extra mile in promoting peace and reconciliation in our society,” Ms. Johnson Sirleaf said. “We are going to reach out to everybody and ensure that they have a participation in what we do.”

Ms. Johnson Sirleaf won the first presidential election after the war in 2005, becoming the first elected woman head of State in Africa. As a woman President, particularly the first democratically elected president on the African continent, she represents the aspirations and the expectations of women in Liberia and in Africa, she said.

The UN has maintained the peacekeeping force in Liberia since 2003 to bolster a ceasefire agreement ending a decade of war that killed nearly 150,000 people, mostly civilians, and sent 850,000 others fleeing to neighbouring countries. Its mandate includes helping to restore the rule of law and democratic processes as well as facilitating humanitarian assistance. It has a current strength of 7,775 troops and over 1,300 police officers. 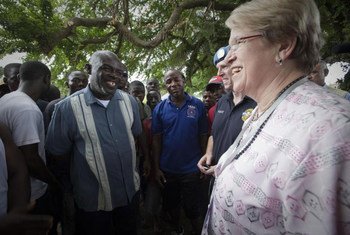 8 November 2011
The United Nations has deplored the loss of life that occurred during election-related violence in the Liberian capital yesterday, and called on everyone to exercise restraint and ensure that peace is maintained.