Concerted and rapid action is urgently needed to curb resource depletion and ensure human activities do not destroy the very environment that supports economies and sustains life, warned a United Nations report released today, which tracks the environmental changes the planet has gone through over the past 20 years.

The report, Keeping Track of our Changing Environment: From Rio to Rio+20, compiles relevant statistical data on population, climate change, energy and food security among other key issues, to draw a picture of the current environmental landscape, spotlighting challenges ahead.

Achim Steiner, Executive Director of the UN Environment Programme (UNEP), said the report was a timely reminder for world leaders of the areas that continue to need urgent attention such as the rapid build-up of greenhouse gases, the erosion of biodiversity and the use of natural resources, which increased by 40 per cent from 1992 to 2005, a much faster pace than population growth.

Other key issues highlighted by the report include ongoing forest loss in Africa, Latin America and the Caribbean, with a decrease of 300 million hectares of forest areas in the region since 1990, and the diminishing glaciers which have influenced the current rise in sea-levels, threatening the well-being of approximately one sixth of the world’s population.

However, Mr. Steiner said the report also highlights areas where progress has been made and “underlines how, when the world decides to act it can dramatically alter the trajectory of hazardous trends that threaten human well-being – action to phase-out ozone-damaging chemicals being a spirited and powerful example.”

The report notes that many environmental issues, which were only emerging in 1992, when the Earth Summit was held in Rio de Janeiro, are now part of mainstream policy-making in many countries due to consumer and civil society demands.

Some of these issues include the implementation of recycling practices, the commercialization of renewable energy, the rise in sales of organic products and eco-labelling, and the use of carbon trading as a way to regulate greenhouse gas emissions.

In addition, the report draws attention to the increase in the support for developing green economies, with more government investment in ways to effectively manage their resources and curb their carbon emissions as part of their broader economic development strategy.

Mr. Steiner said the upcoming UN Conference on Sustainable Development Rio+20 in the Brazilian city of Rio de Janeiro next June could help address the negative effects mentioned in the report and enhance efforts already having a positive impact.

“Rio+20, under the two themes of a Green Economy in the context of sustainable development and poverty eradication and an institutional framework for sustainable development, can, with the requisite level of leadership, trigger the necessary switches that may ensure that the balance of negative versus positive trends moves from the red into the black and that the right to development is enjoyed by the many rather than the few,” he said.

The report is part of UNEP’s Global Environmental Outlook-5 (GEO-5) series, which assesses the state and trends of the global environment. The full GEO-5 report will be launched next May, one month ahead of Rio+20. 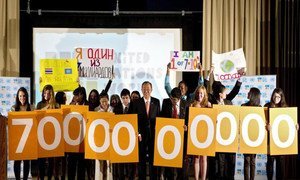 Top United Nations officials today marked the global population reaching 7 billion with a call to action to world leaders to meet the challenges that a growing population poses, from ensuring adequate food and clean water to guaranteeing equal access to security and justice.