Ignoring the role that women can play in peacebuilding increases the chances of failure for sustainable peace processes, a United Nations official said today, adding that recent efforts to include them are slowly leading to progress in various countries.

In her remarks to the Security Council in New York, Assistant Secretary-General for Peacebuilding Support Judy Cheng-Hopkins said there has been an increase in UN initiatives over the past year to give women a more prominent role in its peacebuilding operations, but warned that there are still many challenges to be met to ensure they can contribute significantly to these processes.

Ms. Cheng-Hopkins outlined various areas in which women were gradually being integrated into peacebuilding such as mediation, government representation and the rule of law, and said she was pleased to note there was a broad agreement among the UN, the European Union (EU) and the World Bank on the importance of integrating gender into several peacebuilding aspects such as post-conflict need assessments.

She also praised the joint work of the Peacebuilding Support Office (PBSO) and UN Women, the UN Entity for Gender Equality and the Empowerment of Women.

Regarding the rule of law, Ms. Cheng-Hopkins pointed to the provision of legal support and services to women in Burundi, Central African Republic (CAR), Iraq and Somalia. In addition, she special courts have been established in Liberia to deal with sexual and gender-based violence, and experts have been provided to commissions of inquiry in Côte d’Ivoire and Libya.

Ms. Cheng-Hopkins also talked about the successful efforts to increase solidarity among women in politics such as the “All Political Parties Women’s Association” in Sierra Leone, which aims to encourage coalitions among women from different parties around issues that pertain them. The programme, funded by the UN Peacebuilding Fund (PBF) and the UN Development Programme (UNDP), has had positive results and is now focusing on improving women’s representation in public office.

However, Ms. Cheng-Hopkins said there are various areas where change needs to be accelerated.

“We need to do better in comprehensively engaging and targeting women in economic recovery efforts,” she said. “We also need more women mediators in peace processes, including from the UN, which did not appoint any women special envoys or chief mediators last year.”

She also stressed that projects that further gender equality and women’s empowerment require an increase in funding, adding that the PBF launched a $5 million initiative for this purpose.

In her remarks, Ms. Cheng-Hopkins also talked about other priority issues for the UN Peacebuilding Commission (PBC), including the need to effectively manage natural resources in developing countries so they don’t represent a source of contention but one that stimulates economic growth in post-conflict countries. She also pointed to organised crime and drug-trafficking as a crucial issue that poses a direct threat to stability in a country.

Speaking on behalf of the PBC, Ambassador Sylvie Lucas of Luxembourg said the Commission was increasing its regional focus to deal with the issue of organised crime by organizing meetings between national governments and the UN Office on Drugs and Crime (UNODC), adding that sharing knowledge on this issue is a crucial element of the PBC agenda to ensure peacebuilding efforts are not undermined.

The PBC was set up in 2005 to help struggling countries avoid slipping back into war and chaos by providing strategic advice and harnessing expertise and financing from around the world to aid with recovery projects. 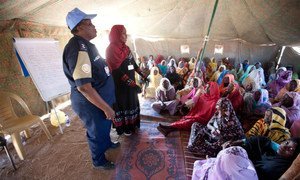 The Security Council today welcomed efforts by countries to implement a landmark resolution calling for strengthening women’s participation in peacebuilding, peacekeeping, conflict prevention and mediation process, but voiced concern over continuing gaps in implementing the resolution.