Nearly 470,000 cholera cases reported in Haiti over the past year – UN

Almost 470,000 cases of cholera, including 6,595 deaths, have been reported in Haiti since an epidemic of the disease erupted in the Caribbean country one year ago, the United Nations World Health Organization (WHO) reported today.

Some 250,000 of the cholera patients had been hospitalized over the past year, the agency’s spokesperson, Tarek Jasarevic, told reporters in Geneva, adding that the disease could infect 75,000 another by the end of the year if the current trend continues, bringing the cumulative total number of cases to about half a million.

After a decline in weekly cholera incidents in August, the number of cases rose in September, with South and Nippes departments seeing significant increases, along with Nord, Centre, and the capital Port-au-Prince.

Mr. Jasarevic said that with heavy rainfall forecast this month in the departments of South, South-East, North and other parts of the country, conditions favourable to the spread of cholera and other diseases water-borne diseases are expected to arise.

According to Mr. Jasarevic, a number of WHO’s partners had withdrawn or were scaling down their operations in Haiti due to a lack of funding. The agency has urged the humanitarian community and donors to remain vigilant as long term and coordinated cholera response may be necessary. 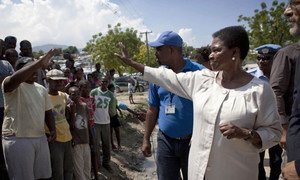 Access to safe drinking water, sanitation and food are the priority humanitarian needs in Haiti over the next year, the United Nations relief chief said today, stressing that the estimated 600,000 people still in camps after last year’s earthquake continue to depend on aid for survival.