A United Nations human rights expert today urged the international community to scale up its protection measures for Palestinian children living under occupation in the West Bank and Gaza and called on Israel to adopt guidelines in line with humanitarian law for children who are arrested or detained by its military authorities.

In his statement to the General Assembly’s third committee, the UN Special Rapporteur on the situation of human rights in the occupied Palestinian territories Richard Falk expressed concern for the security of children living in the West Bank, saying that occupation is having alarming effects on their health and well-being.

“Prolonged occupation deforms the development of children through pervasive deprivations affecting health, education, and overall security,” Mr. Falk warned. “The insecurity of Palestinian children is aggravated in the West Bank, including East Jerusalem by settler violence and night time raids and detentions by Israeli occupation forces, house demolitions, threatened expulsions, and a host of other practices.”

In Gaza, he remarked that children are affected by “traumatizing periodic violent incursions and sonic booms resulting from over-flights, as well as the still unrepaired destruction of refugee camps, residential communities, and public buildings by Israeli forces.”

Mr. Falk said these conditions are causing an increase in anxiety, post-traumatic stress disorder and depression in Palestinian children, who are more vulnerable to the effects of violence than adults.

In addition, he said he was concerned about reports of violence against children during arrest and detention procedures by Israeli military authorities. He noted that the number of Palestinian children arrested and prosecuted has risen in the past four years, many of these made because of allegations of stone-throwing at settlers or Israeli soldiers.

“The arrest procedures documented by UN agencies and reliable human rights organizations include arrests in the middle of the night, removal of child from parents for questioning, abusive treatment at detention and conviction procedures that appear to preclude findings of not guilty,” he said.

In his report, Mr. Falk described an incident in which a three-year old girl was taken outside her home at 3 a.m. and threatened at gunpoint. “She was told she would be shot and her family home destroyed unless she revealed the whereabouts of her brother,” Mr. Falk said, “and now, her mother explained, she can’t sleep through the night and bedwets.”

Mr. Falk also stressed that many Palestinian children have stopped attending school because of frequent settler harassment, which is not stopped by Israeli authorities. “The failure to prevent and punish settler violence remains a serious and ongoing violation of Israel’s fundamental legal obligation to protect the civilian population,” he said.

During a press briefing in New York today, Mr. Falk told reporters that this pattern of violence is directed not just at children but at Palestinian communities and their properties, and highlighted that there has been a 50 per cent increase in settler violence this year, with daily reports of vandalism against the Palestinian population.

Mr. Falk added that international human rights law will need to change as it currently does not deal with the special circumstances experienced during a prolonged occupation. He remarked that entire generations have lived under these circumstances, making it a priority to implement legal protection for them.

In his report, the UN expert urged Israel authorities to adopt guidelines according to humanitarian law to protect Palestinian children who are arrested or detained, and the international community to “urgently allow entry to Gaza of material needed for repair of water and electricity infrastructure” to avoid deterioration of the health of civilians, particularly children who are in a critical condition. 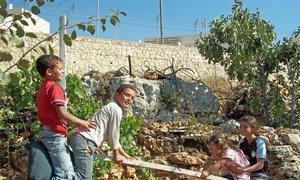 The United Nations human rights office called on Israel today to stop attacks by settlers against Palestinian civilians in the occupied West Bank, citing a spike in violence in recent weeks resulting in serious physical injury, property loss and damage.