The United Nations independent expert on the situation of human rights in Iran today voiced concern over alleged violations in the country’s judicial system, citing practices such as torture, cruel or degrading treatment of detainees, and the imposition of the death penalty without proper safeguards.

Presenting his report to the General Assembly’s third committee, which deals with social, humanitarian and cultural affairs, Ahmed Shaheed, the Special Rapporteur on the situation of human rights in Iran, also identified denial of access to legal counsel and medical treatment, and widespread use of secret and public executions, as other issues of concern.

There were also reports of capital punishment in juvenile cases, and the use of the death penalty for cases that do not meet the level of serious crimes by international standards, he said.

“In some cases, elements of Iran’s penal code and legal practices amount to contravention of those international laws it acceded to,” said Mr. Shaheed.

He said Iran’s record seems to have gained particular attention because of the country’s “lack substantive cooperation with the UN human rights system and because of the existence of frequent reports of suppression of those self-correcting mechanisms that deprive Iranians from freely seeking redress or reform within the parameters of their human rights.”

The “self-correction mechanisms” that are suppressed include free and fair elections, denial of freedom of expression and assembly, allegations of depravation of the right to education, harassment and intimidation of religious and ethnic minorities, human rights defenders and civil society and religious actors.

He urged Iranian authorities to provide adequate medical access to the well-known cleric Ayatollah Kazemeini-Boroujerdi, and to consider his immediate release.

He also urged Iran to cooperate with him as he carries out his mandate. “In the absence of this, however, my course of action will be to continue to obtain information through interaction with Iranians both in the region and in other parts of the world, as well as with non-governmental organizations (NGOs) and other parts of the UN system.”

Mr. Shaheed said he had been informed of the arrests and prosecution of at least 42 lawyers for their attempts to provide legal counsel. Charges brought against the majority of them include acting against national security; participating in illegal gatherings; insulting the Supreme Leader; and spreading propaganda against the regime.

He took notice of the positive steps taken by the Iranian authorities, including the Government’s recent decision to release between 60 and 100 prisoners, many of whom had been arrested as a result of their participation in events related to the 2009 presidential elections. 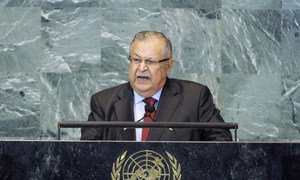 Iraq is striving to build a democratic State anchored in peace and the rule of law, with all communities living in harmony, irrespective of their sectarian, ethnic or factional affiliation, the country’s President, Jalal Talabani, told the General Assembly today.