Timor-Leste and the United Nations are stepping up their efforts to uncover unexploded ordnance (UXO) in the small South-East Asian country and strengthen its capabilities to dispose of these deadly objects.

Specialized teams from United Nations Police (UNPOL) and the Timor-Leste National Police (PNTL) have been collecting UXO from across the country and disposing of it, the UN peacekeeping mission (UNMIT) reported.

In Metinaro today another 19 pieces of UXO, including mortars, hand grenades and artillery, were disposed of safely.

The UNPOL team is currently the only organization in Timor-Leste to provide expertise in UXO removal and offer training to PNTL officers in the procedure.

UNMIT reported that last week two men died and one was critically injured in Baucau when they tried to handle a UXO they uncovered, underscoring the importance of raising awareness about the risks of interacting with them.

UNPOL Commissioner Luis Carrilho warned of the dangers of UXO, “It is important for citizens not to touch or handle any suspicious object they might find,” he said. “They should immediately inform police, keep their distance from the object and prevent others from approaching it.”

PNTL General Commander Longuinhos Monteiro highlighted the importance of getting locals to acquire the expertise needed to handle UXO.

“I am pleased that the PNTL is gaining the highly specialized skills needed to dispose of such ordnance safely,” he said. “Through our community policing we are raising awareness among the Timorese people of the danger posed by unexploded ordnance.”

While most of the ordnance in the country dates back to the Second World War, its disposal only began in 2006, and is carried out every six months or so. 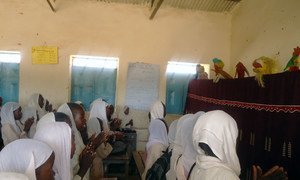 The joint United Nations-African Union peacekeeping force in Darfur (UNAMID) is using puppets to raise awareness among local schoolchildren about the dangers of interacting with unexploded ordnance (UXO).