Cape Verde is the latest Member State to accede to the Rome Statute, the treaty that established the International Criminal Court (ICC) that prosecutes individuals for genocide, crimes against humanity and war crimes.

The Statute will enter into force for Cape Verde on 1 January 2012, bringing the total number of States parties to 119.

The ICC President, Judge Sang-Hyun Song, welcomed Cape Verde into the tribunal system, saying: “As the first Lusophone country in Africa to ratify the Rome Statute, Cape Verde has not only demonstrated its commitment to international criminal justice but also taken us one step further towards a truly universal system of the Rome Statute, representative of all peoples, cultures and legal systems of the world.”

The President of the Assembly of States Parties to the Rome Statute, Ambassador Christian Wenaweser of Liechtenstein, also welcomed the ratification by Cape Verde, reaffirming the central role that the African region has played in support of the Court.

Established in 1998, the ICC can try cases involving individuals charged with war crimes committed since July 2002. The United Nations Security Council, the ICC Prosecutor or a State Party to the Court can initiate any proceedings, and the ICC only acts when countries themselves are unwilling or unable to investigate or prosecute. 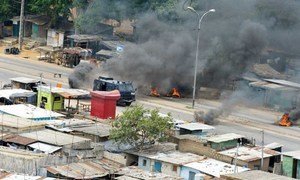 The International Criminal Court (ICC) today authorized its prosecutor to probe alleged abuses committed during the recent post-election violence in Côte d’Ivoire – the seventh investigation in Africa and the first in a State that is not party to the treaty that set up the Court.