Countries in the Asia-Pacific region should simplify their trade procedures to remain competitive during the current global economic uncertainty, according to experts at a United Nations-convened regional forum on trade policy that concluded yesterday.

Countries in the Asia-Pacific region should simplify their trade procedures to remain competitive during the current global economic uncertainty, according to experts at a United Nations-convened regional forum on trade policy that concluded yesterday.

Severe competition will require countries in the region, which has become the “factory of the world,” to trade more efficiently, according to the over 200 trade officials and experts from 34 countries attending the annual Asia-Pacific Trade Facilitation Forum, organized by the UN Economic and Social Commission for Asia (ESCAP) and the Asian Development Bank (ADB).

Participants at the two-day event, held in Seoul, Republic of Korea, noted that a large proportion of trade transactions involve business-to-business exchange of information and documents, procedures which are often complex and inefficient.

“Compared to competitors, if exporters of your country need a couple of more forms to be filled, along with a few more stamps and signatures, and a couple of more days to complete these trade procedures, they may just not be able to compete anymore – your country could simply lose the export market,” said Ravi Ratnayake, the Director of ESCAP’s Trade and Investment Division.

Participants underlined the important role of sub-regional cooperation and support, particularly for the 12 Asia-Pacific landlocked developing countries (LLDCs) which face transit bottlenecks to ports, a major hurdle to international trade.

The forum also called for better coordination between Asia-Pacific governments and international organizations to facilitate transit access for LLDCs, four of which are also among the region’s 13 States classed as least developed countries (LDCs).

“Sub-regional cooperation on transit is not only good economics as it would increase trade flows for all countries, but also good politics in a rapidly integrating world,” said Dr. Ratnayake.

The forum made a range of recommendations to speed up trade facilitation at national, sub-regional and regional levels.

Participants also emphasized the need for implementation tools for paperless trade as developed by the UN Network of Experts for Paperless Trade (UNNExT) in Asia and the Pacific, and related training for government officials and technical experts of developing countries in the region. 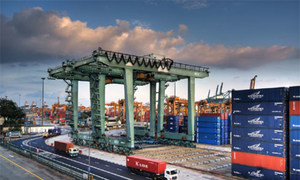 Government representatives from some 30 countries in the Asia-Pacific region today sought United Nations assistance in their efforts to have bottlenecks to intra-regional trade and investment removed to foster growth, particularly in the poorest nations.