The United Nations welcomed Mexico City’s new preventive measures to protect its population from earthquakes by ensuring that property at high risk of damage is expropriated by the Government and its occupants provided with safe alternate housing.

The new law was passed last week by the city’s municipal government, coinciding with the 26th anniversary of the September 1985 earthquake, which took 9,500 lives and affected an estimated 2.1 million residents of the country’s capital.

The UN International Strategy for Disaster Reduction chief Margareta Wahlström praised the initiative and called on other local governments to follow its example.

“The last global platform held in Geneva in May of this year called for increased investment in local action and it was all about promoting such initiatives and creating the space for local governments to take these necessary actions. Examples such as this one from Mexico City are exactly what we need from local governments to demonstrate disaster risk reduction tangibly at work and that it does work best at the local level,” she said.

The new law will facilitate vulnerable populations with loans for affordable housing, and will expedite the expropriation process as it will no longer require approval from the Ministry of Works and Services, allowing the Secretariat for Civil Protection and other safety officials to authorize it.

“Mexico City was one of the first cities to sign up for UNISDR’s World Disaster Reduction Campaign - Making Cities Resilient – which we started last year,” said the head of the UNISDR Americas Regional Office, Ricardo Mena.

“We’ve been providing support to the Government of the Federal District of Mexico City to improve Disaster Risk Reduction (DRR) policies and practice. This has partly led to various DRR measures being taken. Preventive actions have been complemented by preparedness initiatives that include training of 10,000 public servants and members of local citizen committees on family disaster preparedness plans,” he said. 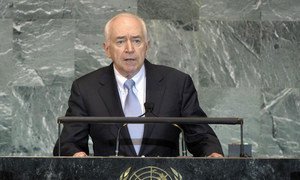 New Zealand today underlined the need for effective disaster preparedness and promised to share with the United Nations and other concerned organizations the lessons the country had learned from responding to the deadly earthquake that struck its second-largest city, Christchurch, in February.