Access to safe drinking water, sanitation and food are the priority humanitarian needs in Haiti over the next year, the United Nations relief chief said today, stressing that the estimated 600,000 people still in camps after last year’s earthquake continue to depend on aid for survival.

“They are extremely vulnerable, facing food insecurity, the threat to cholera and of course natural disasters, such as the current hurricane season,” said Valerie Amos, the Under-Secretary-General for Humanitarian Affairs, briefing reporters at UN Headquarters in New York after her two-day visit to Haiti last week.

During her visit to one of the camps in a neighbourhood of the capital, Port-au-Prince, residents expressed frustration over having to continuing living in the camps because they cannot afford to rent houses or repair their own homes.

“The President, donors and the people of Haiti want to see a much greater focus on development and there is considerable frustration that the pace is slow. But I want everyone to remember that the humanitarian crisis in Haiti is not over.”

“While important efforts are being made to put the country on the road to recovery, and I fully support this, significant humanitarian needs remain and must be addressed,” said Ms. Amos, who is also the UN Emergency Relief Coordinator.

The number of people dying from cholera, which has claimed the lives of nearly 6,500 people in Haiti over the past one year, is falling, but heavy rainfall last month set off new outbreaks of the disease throughout the country.

“Sanitation and the provision of safe water is a national priority, and the ministry of public health and population is progressively improving and taking over the cholera treatment centres,” she said.

“The international community needs to work together to support Haiti. We cannot forget the hundreds of thousands of people living in camps or are affected by the cholera epidemic. We have asked for $382 million for critical relief and protection work this year and have so far received only 57 per cent of the funding needed,” said Ms. Amos.

Guarding against gender-based violence and forced evictions from the camps also remain a critical concern for humanitarian agencies, she added. 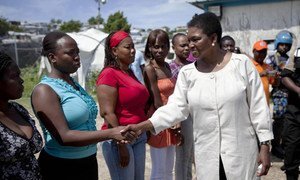 The number of internally displaced persons (IDPs) still in camps in Haiti after their homes were destroyed by last year’s catastrophic earthquake has declined from 1.5 million to 600,000, but hardship in the settlements has not eased, the United Nations humanitarian chief said today at end of her three-day visit to the country.