Yemenis protesting against the government in Sana’a
25 September 2011

The Security Council has urged all sides in Yemen to refrain from violence, including attacks against unarmed and peaceful civilian demonstrators, and called on them to abide by their obligations under international law.

In a press statement issued on Saturday by Ambassador Nawaf Salam of Lebanon, which holds the Council presidency this month, the 15-member United Nations body called upon all parties to move forward urgently in an inclusive, orderly and Yemeni-led process of political transition on the basis of the Gulf Cooperation Council's initiative, which meets the aspirations of the Yemeni people for change.

Members of the Council expressed their grave concern over the serious deterioration of the economic and humanitarian situation in Yemen, and voiced their deep concern over the worsening security situation, including the threat from Al-Qaida in parts of Yemen.

“The members of the Security Council urged parties to ensure access for the provision of humanitarian assistance, expressed their concern about the increasing interruption of basic supplies, and urged all parties not to target vital infrastructure,” according to the statement.

On Friday, Secretary-General Ban Ki-moon took note of President Ali Abdullah Saleh's return to Yemen and reiterated his call on the Government and opposition groups to engage with his special adviser to peacefully resolve the ongoing crisis in the country.

Fresh violence has flared up in Yemen between security forces and protesters seeking to oust Mr. Saleh – part of a wider wave of popular uprisings in the Middle East and North Africa. The President returned to Yemen on Friday after nearly four months in Saudi Arabia, where he was reportedly seeking medical treatment. 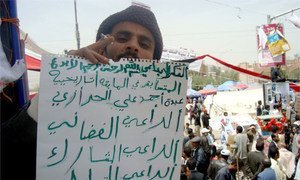 Secretary-General Ban Ki-moon today took note of President Ali Abdullah Saleh’s return to Yemen and reiterated his call on the Government and opposition groups to engage with his special adviser to peacefully resolve the ongoing crisis in the country.